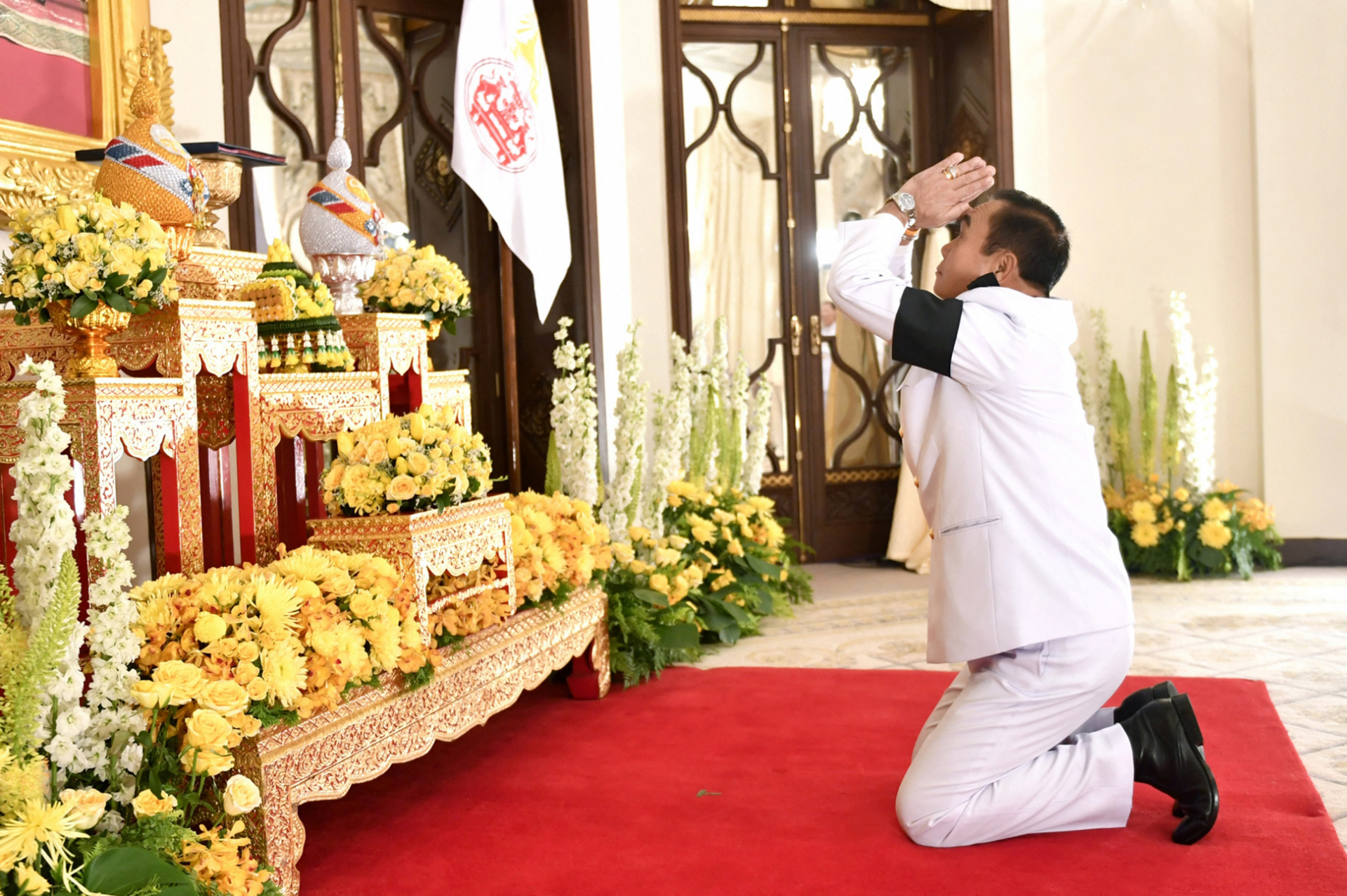 This handout picture released and taken by the Royal Thai Government on June 11, 2019 shows Prayut Chan-O-Cha paying respect before a portrait of King Maha Vajiralongkorn during the royal endorsement ceremony appointing him as Thailand's new prime minister at Government House in Bangkok. (Photo by Handout / ROYAL THAI GOVERNMENT / AFP)

A photo collage that contains an image purporting to show Thai Prime Minister Prayut Chan-Ocha sitting on the floor during a meeting with Brunei's Sultan Hassanal Bolkiah has been shared repeatedly on Facebook. But the image has been doctored: the original photograph shows Prayut sitting next to Hassanal on a sofa during a meeting in March 2015.

The photo collage was shared here on Facebook on June 5, 2021. A screenshot of the misleading post taken on June 10, 2021

The Thai-language caption of the collage translates to English as: “Election is different from robbery.”

The caption is an apparent reference to the May 2014 military coup that deposed Thailand's elected government and installed Prayut as junta chief, as AFP has reported.

In line with protocol, junta members prostrate themselves before the new king at audiences, as video released by the palace shows.

Prayut was made Prime Minister in June 2019 after an election. His government has repeatedly affirmed the importance of upholding the Thai monarchy, and Thai media regularly runs images showing top government officials kneeling before the king.

The same misleading photo collage was also shared here, here and here on Facebook; and here in an online forum post.

But the image that shows Prayut has been doctored from an original that did not show the Thai leader sitting on the floor.

A reverse image search on Google found the original photo was published here on March 26, 2015 on the local lifestyle website Kapook.

Below is a screenshot comparison of the doctored image in the misleading posts (L) and the original photo (R):

Further keyword searches found the image corresponds to similar photographs published here by the Thai Ministry of Foreign Affairs of a meeting between Prayut and Hassanal in March 2015.

Multiple keyword searches online did not find any credible news or government reports that indicate Prayut sat on the floor during his meeting with Hassanal.

The other images in the photo collage that show former prime ministers Thaksin and Yingluck with the Brunei leader have previously appeared in this 2019 blog post and in this 2011 news report, respectively.