An article claiming a student who hacked into the University of Johannesburg’s website had awarded herself distinctions has been shared thousands of times since it was first published in March 2020 and has been gathering steam on social media again. However, the story is entirely fabricated and originated on a satirical website. The South African university, which has been battling recent student protests over student debt, dismissed the claim two years ago.

Screenshots of the story were posted to Facebook here and here on March 10, 2021, and have been shared hundreds of times.

“UJ student Phindile hacked the system & gave herself distinctions,” reads the first line of the screenshot, adding in the next that she had also helped 200 other students graduate. 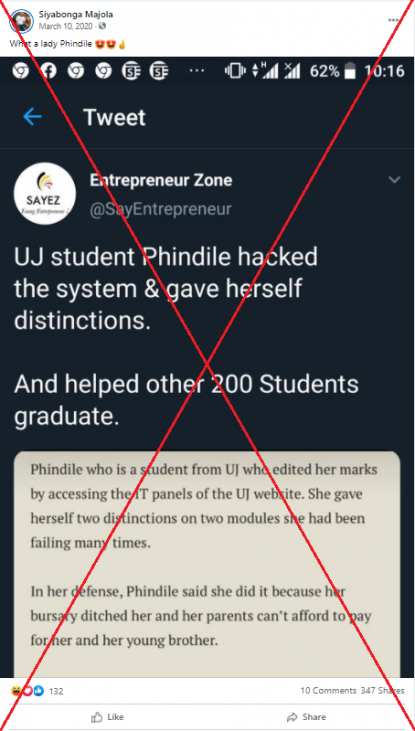 “UJ” refers to the University of Johannesburg, one of South Africa’s largest higher education institutions.

The article explains that the student, named only as Phindile, purportedly accessed the “IT panels” on the university’s website and modified her results to reflect two distinctions on modules she had previously failed.

She did this, according to the article, because her bursary “ditched” her and her parents were unable to afford the fees.

“What a lady,” reads the caption on one of the Facebook posts which shared the claim, while the other described it as “leadership”.

We traced the article to its earliest version and found that it was first published on March 5, 2020, by Ihlaya News, a South African parody website that has been the source of several viral stories fact-checked by AFP. The Afrikaans word “Ihlaya” translates into English as “joke”, while the Afrikaans tagline means “news parody you like”. 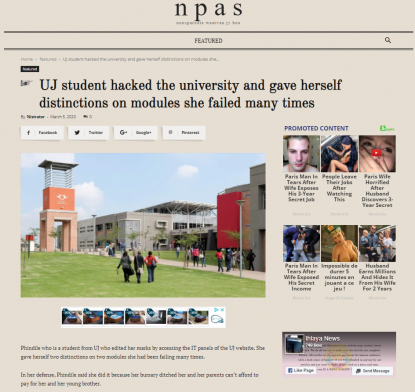 A screenshot of the satirical article on Ihlaya News taken on March 17, 2021

The fabricated story went viral about one year ago, prompting the university to tweet a statement dismissing it as “misinformation being peddled as legitimate news”.

#UJ has noted a report peddling misinformation disguised as legitimate news. The report, which was published on a news satire/parody site, is FALSE! Sadly, many readers have been misled to believe that it is real news. It is FAKE news! #phindile

The story has resurfaced during deadly protests at the university and other institutions, in which demonstrators have called for students with outstanding debt to be allowed to register for the 2021 academic year.

A screenshot of the misleading article on Opera News taken on March 17, 2021

You can read more AFP fact checks that originated on the site here and here.