South Africa is yet to release Grade 12 results for 2020

Social media posts claim that only 120,000 matric pupils in South Africa out of 700,000 who wrote their final exams ending up passing the 2020 academic year. This claim is false; while more than one million candidates sat for the final exams in 2020, results have not been released yet owing to Covid-related delays.

The claim first appeared as a purported quote by South Africa’s Minister of Basic Education, Angie Motshekga, in the headline of an article published on February 8, 2021, by Opera News App, an international news aggregator. 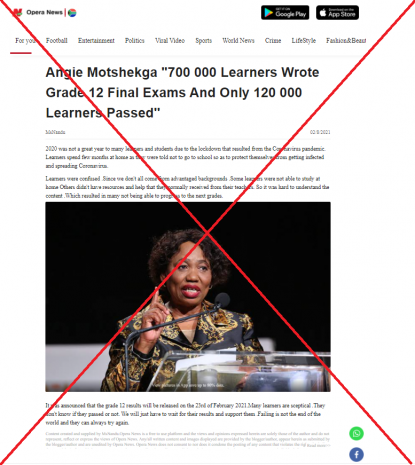 A screenshot of the misleading headline from Opera News, taken on February 16, 2021

But the content of the article contradicts the headline, noting that “the grade 12 results will be released on the 23rd of February 2021”.

This detail was ignored by Facebook users who shared the headline as fact, including this post in which the author promotes currency trading as a career path for those who failed.

However, the claim about the number of matric pupils who wrote and failed is false.

A scan of Opera News where the false headline appeared shows that the news aggregator features a range of articles from various websites, including gossip blogs as well as credible online media. Some of the articles, however, are produced by authors using aliases or auto-generated names that AFP Fact Check was unable to verify.

A search of the link using the tool Know Knews by Media Monitoring Africa warns that the website “may contain dodgy news”. AFP Fact Check also found Opera News listed under “fake news” on Infraplex, an information and telecommunications company based in South Africa. 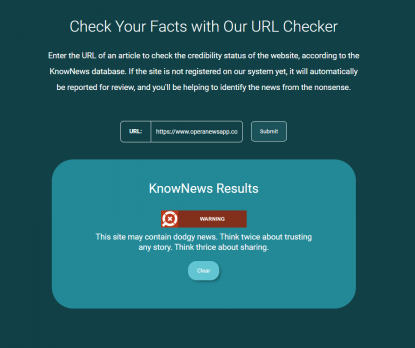 A screenshot of the results from the Know Knews tool taken on February 16, 2021

In a January 2021 interview with online publication Tech Cabal, the editorial manager of Opera News in Nigeria, Collins Udeme, said although people accused the platform of spreading misinformation, it was merely a content distributor and not a publisher.

“At the end of every article, there’s a disclaimer that states who is responsible for the article. And if there are some concerns, affected persons can reach out to Opera News directly,” he said.

The following was the disclaimer at the end of the article falsely quoting Motshekga on the 2020 matric exams: “Content created and supplied by MsNandu. Opera News is a free to use platform and the views and opinions expressed herein are solely those of the author and do not represent, reflect or express the views of Opera News. Any/all written content and images displayed are provided by the blogger/author, appear herein as submitted by the blogger/author and are unedited by Opera News … (sic)”

Results to be released

“That’s complete fake news, in fact, that post came even before we handed over the data to Umalusi,” said Mhlanga.

Umalusi monitors and reports on the quality of the qualifications and curricula used in schools.

School exams in South Africa were delayed last year because of the Covid-19 pandemic; normally the exam period runs from the end of October to the end of November.

Mhlanga explained that the enrollment for final exams in 2020 was higher than the year before because the preliminary tests that usually take place over May and June were combined with the final exams.

Preliminary exams are not compulsory, and so some schools chose not to write them and rather focused on learner support, he added.

The 2020 matric results will be released on February 23, 2021. Private schools announced results a few days earlier, as they usually do in South Africa, on February 19, 2021.