A video viewed more than five million times on Facebook and Twitter purports to show a photographer attempting to take photos of Afghan President Ashraf Ghani during a swearing-in ceremony for his second term in 2020. The clip appears to show the photographer being startled by explosions that can be heard in the background. The video, however, has been edited to include the photographer. It was created by a filmmaker who regularly posts humorous videos.

“Bad time to be a photographer,” the caption reads, alongside a laughing emoji.

The video appears to show a photographer taking pictures of Ashraf Ghani as he delivers a speech. The man suddenly jumps up and looks round as a series of explosions are heard in the background. Ghani remains calmly at his lectern as people behind him rush for cover, and at one point appears to gesture to the photographer to remain calm. 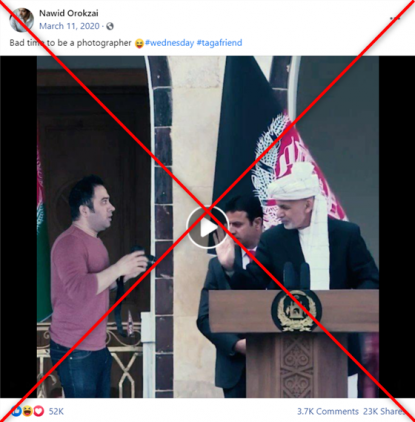 While some Facebook users found the edited video humorous, some appear to have been misled and believed the photographer was genuinely filmed at the swearing-in ceremony.

The same video was shared here, here and here on Facebook and here on Twitter alongside a similar claim.

But the video has been edited to include the photographer.

A reverse image search of video keyframes on Google found this AFP video of Ghani's swearing-in ceremony on March 9, 2020. No photographer can be seen in the clip.

The video's description reads: “Blasts are heard as Afghan President Ashraf Ghani is sworn in for a second term. His rival Abdullah Abdullah held a parallel inauguration that could plunge the country deeper into crisis ahead of peace talks with the Taliban.”

According to a report published by the Business Standard here which is jointly credited to AFP and Press Trust of India (PTI), hundreds of people had assembled at two venues inside the presidential palace complex to watch the swearing-in ceremonies for Ghani and challenger Abdullah, when the blasts were heard.

"I have no bulletproof vest on, only my shirt, I will stay even if I have to sacrifice my head," Ghani told the remaining crowd, as sirens sounded overhead.

Below is a screenshot comparison of the AFP video (L) and the edited video in the misleading post (R) : 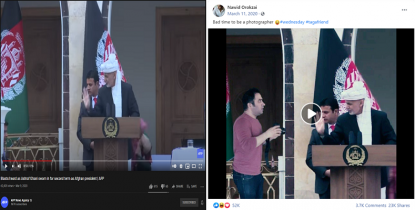 The clip was originally posted by Nawid Orokzai, a video journalist and comedian who also plays the role of the scared photographer.