Skip to main content
A man looks at his phone as he rests at Houston’s George R. Brown Convention Center, where people have taken shelter from the cold, on February 17, 2021 (AFP / Thomas Shea)

Social media posts shared thousands of times claim Texas pastor Joel Osteen has not opened his massive Lakewood Church to those in need of shelter, despite a big freeze paralyzing the state. This is false; both the church and the city of Houston have said the facility is being used for that purpose. 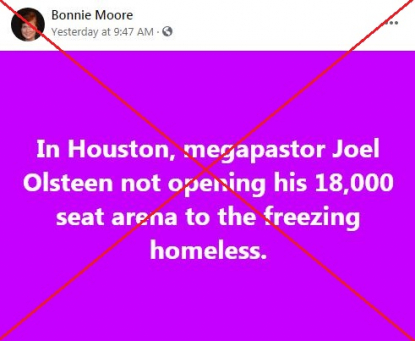 Critics also took aim at the pastor in 2017, saying he kept the church shut to those in need of help after Hurricane Harvey hit Texas.

Osteen is a celebrity preacher, and Lakewood Church services -- which are held in a stadium where the Houston Rockets NBA team used to play -- have drawn tens of thousands of worshipers per week.

On February 14, 2021, the church tweeted that it is “a designated Warming Center beginning today for anyone in need of shelter.”

Power companies in Texas have implemented rolling blackouts to avoid grids being overloaded as residents cranked up electric heaters.