Soon after former adult film actress Mia Khalifa tweeted her support for protesting farmers in India, an image circulated online that purported to show a group of men feeding a photo of her on a poster. The image circulated alongside a claim that the men were Indian National Congress party politicians. The image, however, has been doctored to include the photo of Khalifa. The original photo is an AFP photo that shows young Congress supporters feeding cake to a photo of party leader Rahul Gandhi on his birthday in 2007.

The image was published on Facebook here on February 7, 2021. 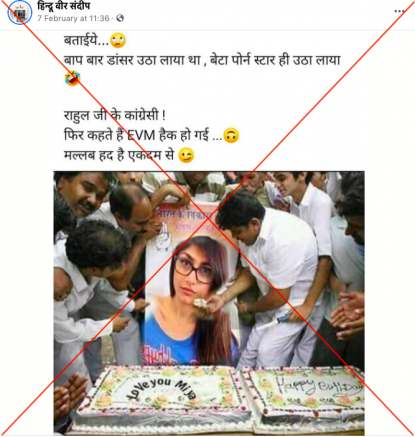 Rahul Gandhi is a leading politician in the Indian National Congress. His father, who is referenced in the Facebook post, is former Prime Minister Rajiv Gandhi, who was married to current Congress party president Sonia Gandhi.

The image, which appears to show a poster featuring a photo of Khalifa, circulated after the former adult film actress tweeted in support of the ongoing Indian farmers' protests against agricultural reforms on February 3, 2021.

The image of men appearing to feed cake to a poster of Khalifa was also published alongside similar captions on Facebook here and here; on Twitter here and here.

Twitter users appeared to believe the image was authentic and posted comments such as: "Congress workers are getting excited by feeding her cake, they do these kinds of work based on their characteristics."

A reverse image search on Google found that the original photo was taken by AFP and published here in June 2007.

The photo shows Indian Youth Congress supporters feeding cake on a poster of Rahul Gandhi on his birthday. 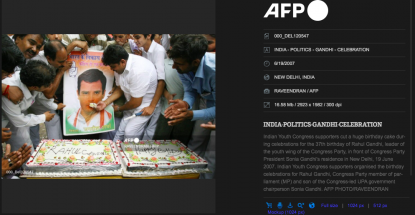 Screenshot of the AFP photo

Below is a screenshot comparison of the image in the misleading posts (L) and the original AFP photo (R):

The misleading posts claim that Sonia Gandhi was a bar dancer has also been previously debunked by the Indian fact-checking website Boomlive here.