These photos actually show bridges in Indonesia and Japan

A photo collage has been shared in multiple Facebook posts that claim it shows the reconstruction of a collapsed bridge in the Philippines. The claim is false; the photos in fact show bridges in Indonesia and Japan.

The collage was shared here on September 15, 2020 on Facebook and purports to show “before” and “after” photos of the same bridge in Surigao, a city in the southern Philippines. 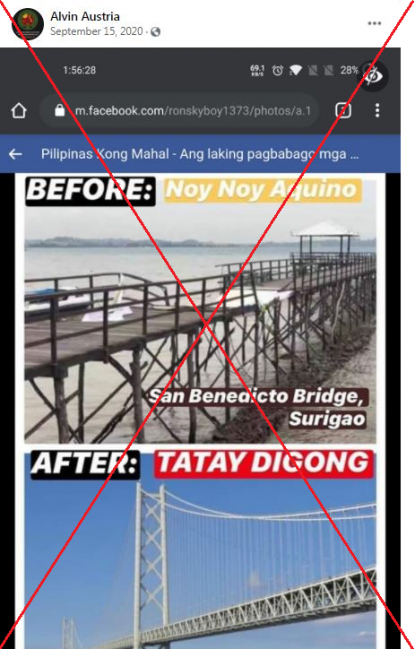 A screenshot of the misleading post, taken on February 17, 2021

The first photo shows a collapsed, wooden bridge overlaid with text in English and Tagalog-language claiming it was taken when Benigno “Noynoy” Aquino III was president of the Philippines from 2010 to 2016.

The second photo, along with English and Tagalog-language text which translates as "After: Father Digong", purports to show the same bridge after its reconstruction by Aquino’s successor, President Rodrigo Duterte, also known as “Digong”.

An identical photo collage was also shared alongside a similar claim here, here and here on Facebook.

The second photo was also shared on its own in Facebook posts here, here and here that claim it was taken in Surigao during the Duterte administration.

However, this claim is false. The collage in fact shows bridges in Indonesia and Japan, not in the Philippines.

A reverse image search on Google traced the first photo to this November 9, 2019 report by Singapore-based newspaper The Straits Times headlined “26 Mendaki staff injured in bridge collapse at Batam resort”.

The photo’s caption reads: “A section of the wooden structure collapsed when about 30 Mendaki staff were preparing to take a group photo on this bridge at Montigo Resorts Nongsa in Batam on Thursday. They reportedly heard a cracking sound, before most of them fell about 3m into shallow waters.”

Mendaki is a Singapore-based self-help organisation that provides educational programmes for the Malay and Muslim community in the country.

Batam is an island in Indonesia that lies across the Singapore strait.

AFP found the wooden bridge mentioned in the report on Google Street View.

Below is a screenshot comparison of the first photo in the misleading posts (L) and the photo from The Straits Times report (R):

A further reverse image search traced the second photo to a Wikimedia Commons page, which states it shows the “Akashi Big Bridge,” a suspension bridge in Japan.

The photo corresponds to this location of the Akashi-Kaikyo Bridge, the world’s longest suspension bridge, on Google Street View.

Below is a screenshot comparison of the second photo in the misleading posts (L) and the Wikimedia Commons photo (R):