A photo of Buddhist monks protesting in a street has been shared hundreds of times in multiple social media posts about demonstrations against the Myanmar military’s coup in February 2021. The photo, however, has been shared in a misleading context: the image is actually an AFP photo of Buddhist monks protesting in Yangon in 2007.

The photo was published here on Twitter on February 11, 2021. It has been retweeted more than 250 times.

“The monks in Myanmar went to the streets. And look at the monks in China. Chinese monks from the past generations went down the mountain to cheat and hide in the temple in troubled times. If there is a chance for riots, they never let it go,” the Chinese-language caption reads. 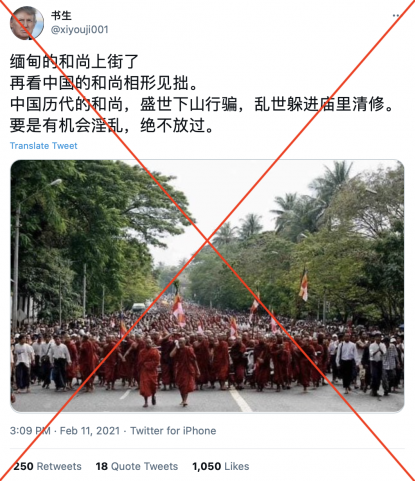 Tens of thousands of people have rallied across Myanmar in opposition to a military coup on February 1, 2021. The military arrested democratically-elected leader Aung San Suu Kyi and President Win Myint, which they justified by alleging widespread voter fraud in November elections won by Suu Kyi’s party in a landslide.

The same photo was shared alongside a similar claim on various platforms, including Facebook here and here; on Twitter here and here; and on Weibo here.

A keyword and reverse image searchon Google found the image in AFP’s photo archives. It was taken by an AFP photographer on September 24, 2007. 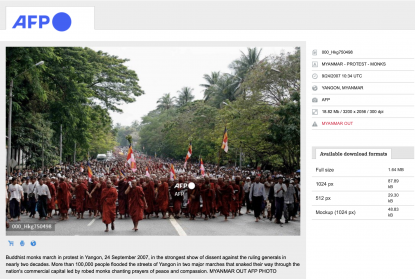 A screenshot, taken on February 18, 2021, of the original AFP photo on its website.

“Buddhist monks march in protest in Yangon, 24 September 2007, in the strongest show of dissent against the ruling generals in nearly two decades,” the photo caption reads. “More than 100,000 people flooded the streets of Yangon in two major marches that snaked their way through the nation's commercial capital led by robed monks chanting prayers of peace and compassion.

Major protests broke out in Yangon during the summer of 2007. Buddhist monks staged democracy marches that were brutally crushed by the army.

The protests were dubbed the "Saffron revolution", inspired by the colour of the monks' robes.

A screenshot comparison of the photo in the misleading post and the AFP photo.