Skip to main content
India's MS Dhoni attends a training session at the Rose Bowl in Southampton, southern England, on June 20, 2019, ahead of their 2019 World Cup cricket match against Afghanistan. (Photo by Saeed KHAN / AFP)

An image showing former Indian cricketer Mahendra Singh Dhoni standing on a tractor has circulated online in social media posts that claim that he is supports a tractor rally organised by protesting Indian farmers in January 2021. The claim is false: the photo is actually from June 2020 when Dhoni bought a new tractor, months before Indian farmers began their agitation.

The image was published here on Facebook on January 23, 2021.

The post’s Hindi-language caption translates to English as: “Former cricket captain MS Dhoni came out in support of farmers' tractor parade, now some uneducated will declare Dhoni as anti-Hindu.” 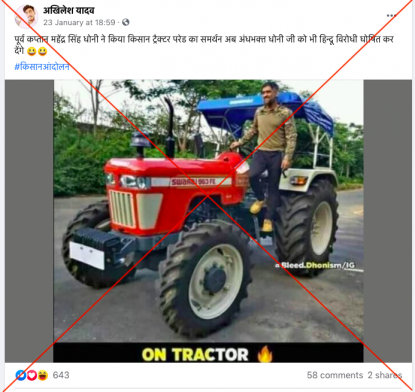 The post circulated as farmers, mainly Sikhs from the northern states of Punjab and Haryana, continue protests they began in November 2020 against agricultural reforms proposed by the central government, which included a tractor rally on January 26, 2021, as AFP reported here.

The photos of Dhoni were also shared alongside similar claims on Facebook here and here, and on Twitter here and here.

A reverse image search on Google found the photo published here by Indian media outlet Indian Express in a report on June 3, 2020, which says Dhoni bought a new tractor.

Below is a screenshot of the image used in the Indian Express story, which gives image credit to the Chennai Super Kings’ Twitter account: 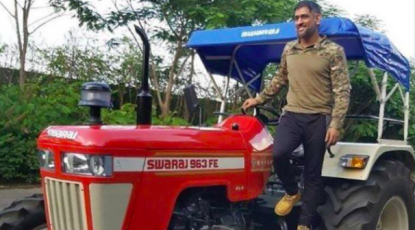 Chennai Super Kings, a franchise for which Dhoni plays in India’s limited-overs cricket tournament also posted a video here on Twitter on June 2, 2020, of their captain driving a tractor.