This video shows an Iraqi mosque attacked by American troops

A video has been viewed millions of times in multiple posts on TikTok, Facebook, Twitter and YouTube alongside a claim it shows Israeli soldiers shooting a minaret of a Palestinian mosque while an Islamic call to prayer is being broadcast. The claim is false. The audio of the video has been edited: in the original video, no call of prayer is heard. The video actually shows a minaret of a mosque in Iraq being shot by American troops.

The video, which shows a minaret being shot at repeatedly while a call to prayer is heard in the background, was published on March 3, 2021, here on TikTok. It has been viewed more than 9 million times. 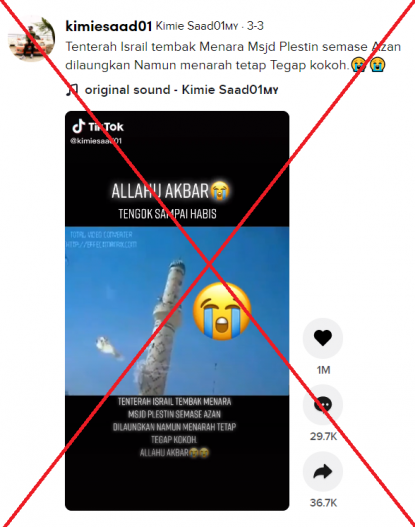 Screenshot of the misleading TikTok post taken on March 17, 2021

The post's Malaysian-language caption reads: “Israeli soldiers shooting a Palestinian Mosque’s Minaret when Adhan is being broadcast. But the minaret Stays sturdy. ??”.

The sticker text reads: “God is great ? / Watch until the end / Israeli soldiers shooting a Palestinian Mosque’s Minaret when Adhan is being broadcast But the minaret Stays sturdy ??”.

“Adhan” refers to the Islamic call to prayer.

The video has also been shared alongside a similar claim here, here, here and here on Facebook; here on Twitter.

The clip has appeared with a similar claim in Indonesian language here and here on YouTube, as well as here on Twitter.

A combination of reverse image search on Yandex, using keyframes extracted with digital verification tool InVID-WeVerify, and a keyword search on Google and YouTube, found this video posted on the verified YouTube channel of US filmmaker Michael Moore on March 16, 2008.

The video does not have a call to prayer playing in the background.

Jon Michael Turner is a former US Marine and an Iraq war veteran.

In this video, posted on the YouTube channel of About Face: Veterans Against the War, a group of anti-war veterans, Turner described the shooting incident in Iraq. “One of the guys in the weapons company had gotten shot, and this is the way we would take out our aggression,” he said.

While showing the clip of the attack on the mosque, Turner said: “There was no fire that was taken from that mosque. It was shot into because we were angry.”

Turner’s testimony in March 2008 was also reported by SFGate.com and Democracy Now.

Below is a screenshot comparison of the misleading TikTok video (L) and the genuine YouTube video (R), with a matching feature in the background circled in red by AFP:

The same mosque structure can be seen in Reuters photos here and here, published on January 10, 2014, which identified the location as Ramadi, a city in central Iraq.

Below is a screenshot comparison of the misleading TikTok video (top) and the Reuters photos (bottom), with matching features circled by AFP: