An image has been shared in multiple Facebook posts alongside a claim it shows a statue of Indian Prime Minister Narendra Modi erected at an intersection named after him. The claim is false: the image has been doctored to digitally insert the statue and name of Modi into a photo of an intersection in Pakistan.

The image was published here on Facebook on February 26, 2021.

The Hindi caption of the post translates to English as: “This is condemnable, how is he naming streets and stadiums after himself when he is alive. This is not our culture.”

The person referred to in the post is Indian Prime Minister Narendra Modi, as the image appears to show a statue erected at an intersection with the Hindi-language signage reads as “Narendra Modi intersection”. 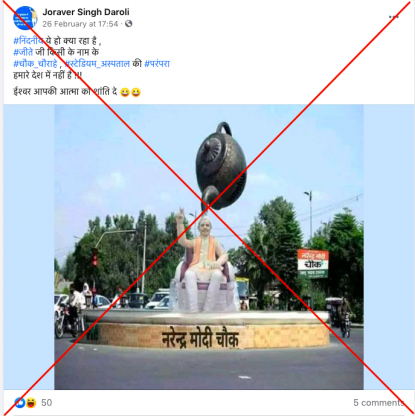 The image spread online as a cricket stadium in the west Indian state of Gujarat was renamed after Modi in February 2021.

The image was also shared here, here, and here on Facebook alongside similar claims.

The claim, however, is false. The image has been doctored to digitally insert the name and statue of Modi.

A reverse image search found the original photo was published on a Pakistani news website Urdu Daily here on September 25, 2018. 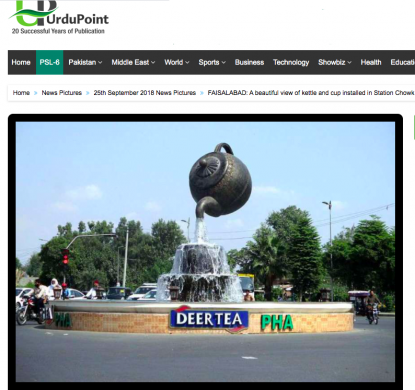 “Faisalabad: A beautiful view of kettle and cup installed in Station Chowk for beautification of the city,” reads the photo caption.

The Station Chowk intersection is located here in the Pakistani city of Faisalabad.

Deer Tea is a Pakistani tea brand. The company also posted a photo of the intersection here on their Facebook page on March 4, 2021.

The water fountain image shared in the post also corresponds with a photo of the Station Chowk intersection seen here on Google Maps. 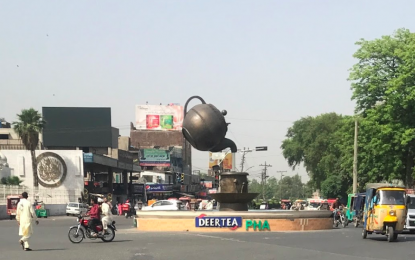 Screenshot of the Google image

A reverse image search of the cropped Modi statue in the post also found the same image of the statue on the e-comMerce website IndiaMart. It is mentioned as a 3-foot Marble Narendra Modi statue which is available for purchase at 65,000 rupees. The product page has been removed but the image can still be seen through keyword searches on Google Image.

The signage on the top right corner in the misleading photo was published here on the Twitter account of a minister in Modi’s government.

Not a single voice of our karyakarta in Bihar will go unheard.I am along with our state president @nityanandraibjp ji at ground zero in Darbhanga and taking stock of the situations.
प्रशासन द्वारा तथ्यों को छुपाया गया है ..मैं पीड़ित की बातों को अपनी सरकार तक ज़रूर पहुँचाऊँगा pic.twitter.com/HuIvtd5mOm