A photo of corpses has been shared hundreds of times in multiple posts on Twitter and a discussion forum alongside a claim that it shows anti-coup demonstrators who were killed by Myanmar’s military. The claim is false; the photo has circulated several months before the military coup in reports about a deadly landslide in Kachin, a state in northern Myanmar, in July 2020 – months before the military coup in February 2021.

The tweet reads: “Many peaceful protesters are brutally and mercilessly arrested. More than 120 civilians were killed and thousands were injured by Junta after 42 days Coup. They turn Myanmar to slaughter ground.” 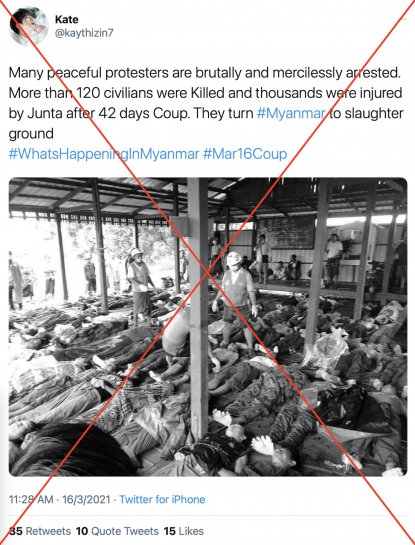 The post circulated as Myanmar security forces continue to violently crack down on  anti-coup protests, which erupted after the military seized power from the former civilian government on February 1, 2021, as AFP reported here.

Assistance Association for Political Prisoners, a local monitoring group, stated on March 16, 2021, that at least 180 people have been killed since the unrest began, AFP reported here.

The photo has also appeared alongside a similar claim here, here and here, where it has been retweeted more than 220 times.

The picture was also posted with a similar claim on Korean discussion forum Gasengi here.

Below is a screenshot comparison of the photo in the misleading post (L) and the Myanmar Update News photo (R):

The photo was also published on a blog here on July 2, 2020. The post is titled: “Hpakant landslide update”.

Hpakant is a township in Kachin state, in northern Myanmar.

As AFP reported here on July 2, 2020, more than 160 jade miners were killed in Hpakant following a landslide that occurred after heavy rain in the area.

Similar photos of the landslide fatalities were also published in July 2020 by local news organisations such as Narinjara here and Khit Thit News here, and by local photographer Zaw Moe Htet here.