A joke post claiming that a hotel cleaner won a child support battle against a millionaire after stealing his sperm from a used condom has been shared thousands of times in various African countries. But we traced the post to a ‘news parody and satire’ site.

We traced the story to an article published by Ihlaya News on November 9, 2019, with the headline, ‘Hotel cleaner who stole sperm from a used condom won child support battle’. 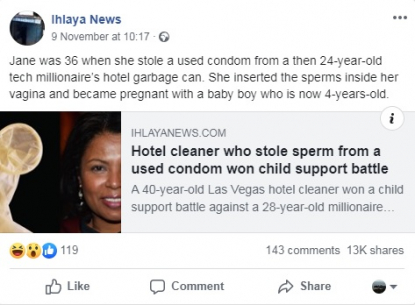 Screenshot taken on November 14, 2019, of Facebook post sharing an article claiming that a hotel cleaner stole a millionaire’s sperm from a used condom

‘Jane was 36 when she stole a used condom from a then 24-year-old tech millionaire’s hotel garbage can,’ the article claims.

‘She inserted the semen inside her vagina and became pregnant with a baby boy who is now 4-years-old.

‘During the child support hearing, Jane confessed that she never slept with the young millionaire and that she impregnated herself with his sperm while she was cleaning his room’.

The article claims the man was ordered to pay the woman $2 million in child support.

The article has racked up over 200,000 interactions on Facebook, including over 35,000 shares, according to online social media monitoring tool CrowdTangle data.

Screenshot taken on November 14, 2019, of CrowdTangle data of the joke post about a hotel cleaner who stole a millionaire’s sperm from a used condom

On Facebook, the article was widely shared in various African countries, including Kenya, Namibia, Ghana, Nigeria and Zambia.

The article was also widely shared on Twitter by @BTBreakingTimes, a verified Nigerian account with more than 17,000 followers.

However, we searched for Ihlaya News on Facebook and found a disclaimer warning that its content was ‘news parody’. Furthermore, the Afrikaans word ‘Ihlaya’ translates as ‘joke’ in English while the tag 'nuusparodie waarvan jy hou' as used on the website translates to 'news parody you like'.

Screenshot taken on November 14. 2019, of disclaimer on Ihlaya News website

A reverse image search on Google traces the photo of the condom in the article to Getty Images. If you can help us identify the woman in the picture, please get in touch here.