A Facebook post shared more than 1,500 times and archived here claims that Buhari died on January 21, 2017, and was secretly buried in his home state of Katsina in northwest Nigeria. It also shared four pictures as alleged evidence of his death and burial. 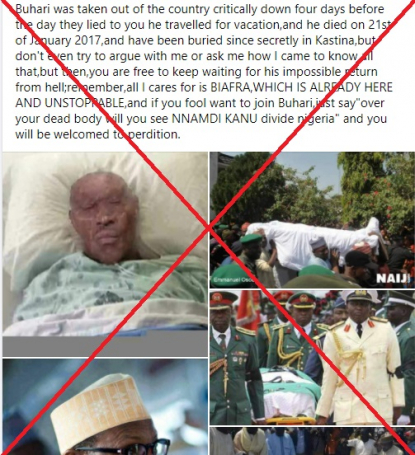 A screenshot of a post claiming to show Buhari dead

The claim was published after protests in Nigeria erupted in early October after a video of a man allegedly being killed by police went viral last month.

The rallies have continued despite the dismantling of the controversial Special Anti-Robbery Squad (SARS) police unit and promises of government reform.

The unrest worsened after security forces opened fire on a large crowd at the Lekki tollgate in Lagos on October 20, 2020. The shooting has drawn international condemnation and boosted the global spread of the #EndSARS hashtag on Twitter.

Buhari was slow to respond to calls from citizens to publicly address what has been dubbed the “Lekki Massacre”, eventually breaking his silence on October 22, 2020, in a televised speech.

The post alleging his death appeared during the 48 hours between the Lekki shooting and Buhari’s TV appearance.

Pictures shared do not show Buhari

The first image shared in the misleading post claims to show Buhari on his deathbed. But AFP Fact Check found the photo has been doctored.

A reverse image search revealed that the man in the bed was American Walter Williams who made headlines in 2014 when he was found alive inside a body bag after having been pronounced dead. Visual clues show that the two photos are the same with the exception of the man’s face. 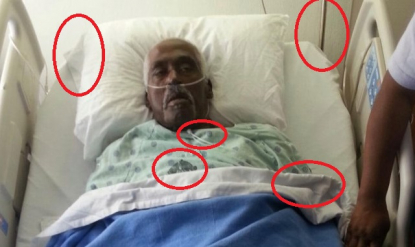 The other pictures in the misleading Facebook post claiming to show Buhari’s body are photos of the 2015 funeral for Abubakar Audu, the former governor of Kogi state in central Nigeria.

As the watermark suggests, the photos were taken for Naij.com, one of the most-read news websites in Nigeria. In 2019, the website, which was founded in 2012, changed its name to Legit.

Photojournalist Emmanuel Osodi, whose credit appears on the images, confirmed that they were taken at Audu’s burial in Kogi state.

He also told AFP Fact Check that he did not “have any pictures that show Buhari dead”.

No evidence to show Buhari is dead

AFP Fact Check has repeatedly debunked claims that Buhari is dead. In 2017, when the claims began surfacing, we checked and found they were not accurate.

The claims re-emerged in August 2020, and we explained in this debunk why they refuse to die. David Ajikobi, the Nigerian editor of fact-checking organisation Africa Check, told AFP Fact Check then that the Buhari posts tend to “resurface during security crises”.

Buhari made a nationwide address on Thursday night from the capital, Abuja. The president warned protesters not to “undermine national security” and said nothing directly about the shooting of unarmed protesters in Lagos.

But he paid tribute “to officers of the Nigeria Police Force who have tragically lost their lives in the line of duty”.