The photo shows Muslims killed at a 2018 rally in Abuja, not EndSARS protest victims

Numerous social media posts have shared an image of shrouded bodies lined up on the ground,  claiming they are casualties from the shooting of protesters at Lekki Toll in Nigeria’s largest city Lagos on October 20, 2020. But the claim is false: the photo shows dead members of the Islamic Movement of Nigeria who were killed in 2018 in the capital Abuja when security forces opened fire at a rally.

The photo showing several bodies in white shrouds lying side by side and surrounded by onlookers appeared in this Facebook post on October 21, 2020. It has been shared more than 500 times since its publication. 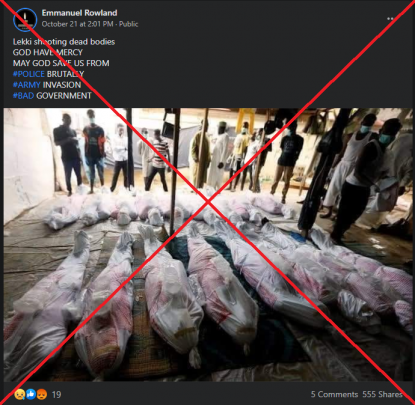 The same image was also shared in this Facebook post alongside a similar claim hailing the deceased as “lekki tollgate heros (sic)”.

Amnesty International accused Nigerian security forces of killing 12 people at the Lekki Toll, fuelling a fresh wave of anger against the government and unleashing unrest across the country, including in its biggest city Lagos.

Lagos governor Babajide Sanwo-Olu claimed only one person died at the scene.

But the claim that the photo shows bodies from the Lekki Toll shooting is false. 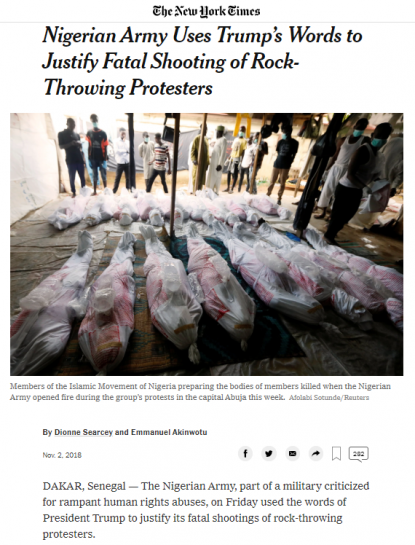 Screenshot taken on October 23, 2020, showing the photo of dead Muslims published by The New York Times in 2018

“Members of the Islamic Movement of Nigeria preparing the bodies of members killed when the Nigerian Army opened fire during the group’s protests in the capital Abuja this week,” reads the caption of the photo taken by Reuters photographer Afolabi Sotunde.

The Islamic Movement of Nigeria, otherwise known as Shiites, was founded by Ibrahim El Zakzaky in the late 1970s and was inspired by the Iranian Revolution. Shiites make up a small minority of Muslim believers in mainly Sunni northern Nigeria and have been at loggerheads with the country’s authorities for decades, as AFP reported here. 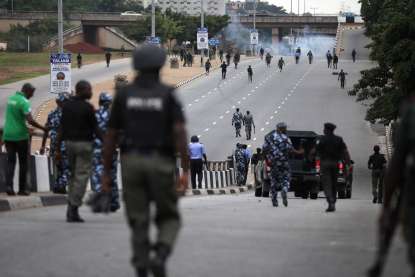 Protests by members of Shiites are often dispersed by Nigeria's security forces, as seen here in a 2019 picture (Photo by Kola SULAIMON / AFP)

The New York Times article was published a few days after Shiites accused the Nigerian military and police of killing 49 of its members in a clash that lasted for two days.

As tensions have escalated in Nigeria in recent weeks, so too has the use of social media to capture and spread images and videos of protests, public violence and targeted killings, with many of these visuals being used out of context or from unrelated events.