An image of a man carrying a person wrapped in a Nigerian flag covered in dark stains has circulated in multiple social media posts claiming it shows a protester who was shot dead during an anti-police brutality rally in Nigeria’s megacity Lagos. But the claim is false: the image is from a play and unrelated to the current unrest.

Popular Nigerian entertainer Tunde Ednut, who has more than 2.5 million followers on Instagram, posted a screenshot of a tweet featuring this image on October 21, 2020. AFP Fact Check has previously debunked several of his posts, including here and here. 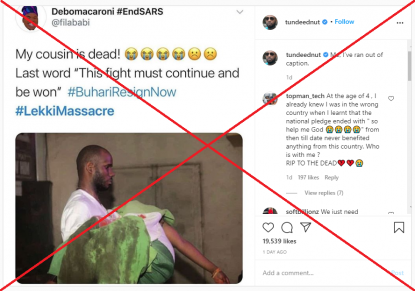 The image has been shared across social media platforms, including on Facebook by prominent Nigerian singer Yemi Alade, as well as by Nigerian and Ghanaian news websites reporting on the anti-police brutality protests in Lagos and other key cities in the West African nation.

The demonstrations in Nigeria erupted in early October after a video of a man being allegedly killed by police went viral.

The rallies have continued despite the dismantling of the controversial Special Anti-Robbery Squad (SARS) police unit and promises of government reform. 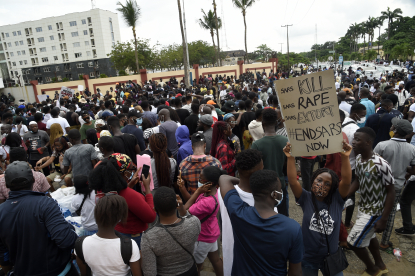 The unrest worsened after security forces opened fire on a large crowd at the Lekki toll gate in Lagos on October 20, 2020. The shooting has drawn international condemnation and boosted the global spread of the #EndSARS hashtag on Twitter.

However, Lagos governor Babajide Sanwo-Olu at first insisted no fatalities had been recorded but later said one person had died from "blunt force trauma to the head".

AFP Fact Check found the photo was from a play staged by Christian members of the National Youth Service Corps (NYSC) in Nigeria’s southern Akwa Ibom state as part of independence celebrations on October 1, 2020.

The graduates who staged the play were part of the Nigeria Christian Corpers' Fellowship (NCCF).

The viral photo “is not in anyway related to Lekki shootings (sic),” NCCF Akwa Ibom said on its Instagram account.

“This is to notify the public that the picture trending online of a man carrying a lady covered in Nigerian flag appearing dead is a picture from NCCF Akwa Ibom state, stage drama night tagged ‘Lord, Heal Our Land’ on the 1st October, 2020 at the NCCF state secretariat,” the statement reads. “The lady in question is alive.” 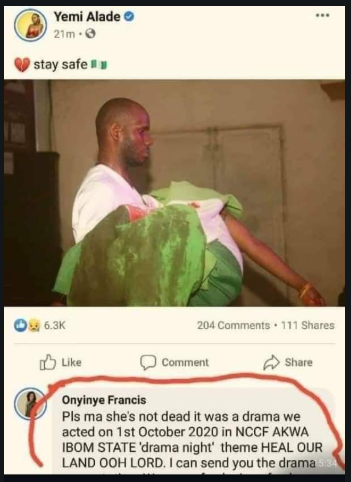 Onyinye had clarified that the photo was shot during a drama presentation by NCCF members.

She also posted the footage of the play on her Twitter account. It shows the scene depicted in the photo.

The bracelet seen on the woman’s wrist, the position of one of her hands, and other visual clues are the same in both the viral image and Onyinye’s footage.

A sift through the NCCF’s Instagram feed found several photos showing the interior of the secretariat, including this one embedded below.

The building’s gallery, a banner with the inscription “IN HIS STEPS”, and a projected screen are visible in both the video clip and the image.

The management of NYSC has also dismissed claims that the image is tied to the protests as false.

The viral photo is among several images that have been shared out of context in the wake of the unrest in Nigeria. AFP Fact Check has debunked others here and here.