This image shows an actor on a movie set, not a man shot during Nigeria protests

A post shared tens of thousands of times on Facebook alongside an image of a bleeding man wearing the uniform of the National Youth Service Corps (NYSC) in Nigeria claims to show one of its members who was killed during protests against police brutality. This is false; the man in the picture is alive and the image comes from a scene in a short film about police brutality in Nigeria.

The Facebook post, shared more than 65,000 times and archived here, was published by a public group called “Force” on October 21, 2020, a day after Nigerian security forces opened fire on a large crowd of protesters at the Lekki toll gate in Lagos. 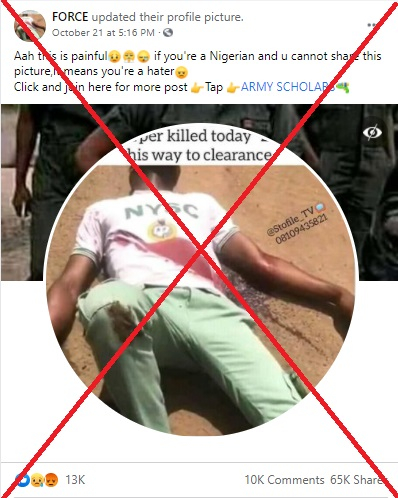 A screenshot taken on October 23, 2020 showing the false post

The image in the post shows a young man in the uniform of the National Youth Service Corps (NYSC) lying on the ground with what looks like blood coming from his body.

“Nigerian Corper killed today ‘21/10/2020’ on his way to clearance,” reads the text above the image. “Clearance” refers to a documentation process at the NYSC secretariat. 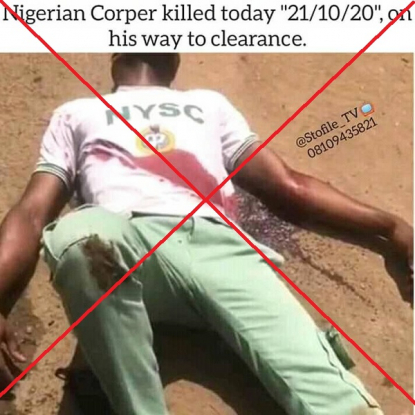 A screenshot taken on October 23, 2020 showing the picture taken out of context

There is no actual mention in the post of the protests currently gripping Nigeria. The unrest erupted early in October after a video of a man allegedly being killed by Nigerian police went viral on social media.

Included in the caption is a link to another Facebook group called “Army Scholars” with more than 26,000 members.

However, another Facebook post here not only includes the same image beside another one, but the caption repeats various hashtags associated with the widespread rallies that have continued despite the dismantling of the controversial Special Anti-Robbery Squad (SARS) police unit and promises of government reform.

“Only BOKO HARAM and Bandits deserve negotiation, dialogue and amnesty. Unarmed youths get live bullets,” reads the caption, before listing hashtags like #EndSARS and #EndBadGovernance. 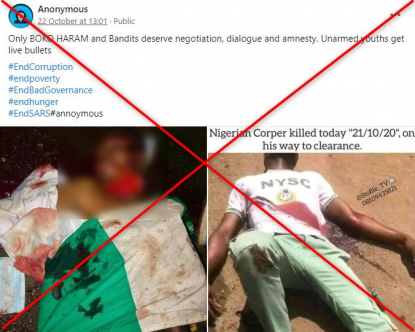 A screenshot of the misleading photo in a post, taken on October 24, 2020

The post contains a second image, which media reports say shows a protester killed in the Lekki toll gate shooting. The graphic image has circulated widely on social media including on Twitter.

AFP Fact Check has not been able to verify the claim independently but the alleged victim's Facebook account shows numerous messages of condolences.

Image from a movie scene

Among the 10,000 comments of the misleading image were some pointing out that the picture was from a movie set.

AFP Fact Check traced one of the comments to a tweet showing a man and women wearing the same NYSC uniforms and two other men in a street holding recording equipment. 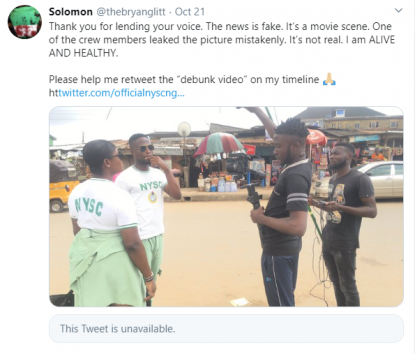 A screenshot taken on October 23, 2020, showing a tweet by Solomon

“The news is fake,” reads part of the tweet. “It’s a movie scene. One of the crew members leaked the picture mistakenly. It’s not real. I am ALIVE AND HEALTHY.”

A link is provided in the tweet to a “debunk video” hosted on the same Twitter account belonging to Boniface Solomon, a Nigerian actor also known as Bryan Glitt, and the man who appears “dead” in the viral image. In the brief clip, Solomon sets the record straight and assures people that he is well and the image has been used out of context.

MEDIA RELEASE: The picture of the guy wearing a blood stained NYSC uniform, lying on the floor is FAKE. ITS A MOVIE SCENE. I am ALIVE and HEALTHY. Pls Retweet ?#EndSarsNow #LekkiMasacre pic.twitter.com/R8OpxQROay

Solomon confirmed to AFP Fact Check that the image of him came from a short film called “Wasted” that was shot in August, 2020, and, ironically, deals with the topic of police brutality.

He supplied a link to the production which was published on YouTube on October 23, 2020.

He supplied a link to the production which was published on YouTube on October 23, 2020.

After being shot, Solomon’s character can be seen dying in the street at the two-minute mark in the film. His clothes and the blood spatter match those in the viral image. 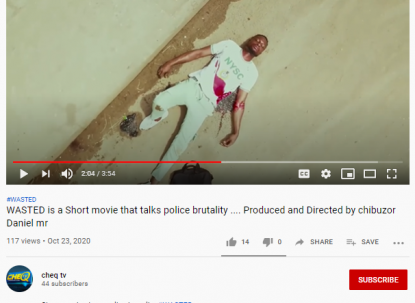 A screenshot taken on October 23, 2020 showing the particular scene of the movie where the picture originated from