President Donald Trump did not ask Africans "are you humans?"

Viral posts shared tens of thousands of times in Africa claim that US President Donald Trump made defamatory comments about Africans, asking “are you humans?”. While Trump’s previous comments about Africa have sparked an outcry, there is no record of him making this statement.

The posts claim that Trump said he would not deceive Africa like the “French Presidents”, who, according to his purported suggestion, plan to recolonise the continent.

One such post archived here, reads: “French Presidents say that France-Africa is over, yet they keep sending you the fake tourists who spy on you and come back and tell them how you should be recolonised (sic).”

A similar post shared more than a thousand times claims that Trump said: “Until your leaders think less of themselves and more about your people. You are not human but animal (sic)”. 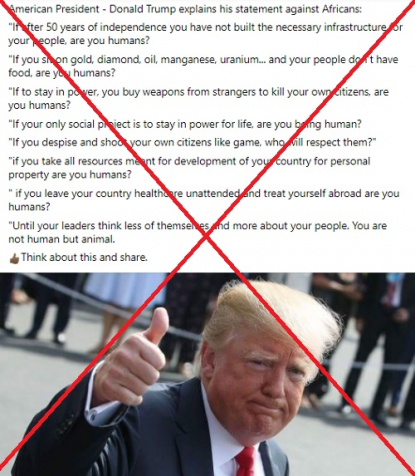 A screenshot taken on November 27, 2020 showing the false post

The same claims have also been shared more than 15,000 times in French (here, here, here and here).

According to our research on Google and the social network analysis tool CrowdTangle, the French version of these posts first appeared on Facebook on January 20, 2018.

The earliest version we found in English (since shared more than 51,000 times) was posted on January 28, 2018, by Scannews, a website notorious for publishing misinformation in Nigeria. AFP Fact Check has previously debunked claims from the Facebook page and website here, here, here, and here.

No record of Trump making these comments

The United States Embassy in Nigeria denied the claim, stating that “none of the quotes ... are attributable to President Trump”.

The same quotes have also been verified and denied by the American fact-checking site Lead Stories.

During his presidency, Donald Trump has spoken little of Africa. While First Lady Melania Trump toured Africa (Ghana, Malawi, Kenya and Egypt) in 2018, her husband has never made an official visit to the continent.

He received three African heads of state at the White House: Nigeria’s Muhammadu Buhari in 2018, Egypt’s Abdel Fattah al-Sissi in 2019 and Kenyan President Uhuru Kenyatta in 2020.

One of the rare occasions Trump mentioned Africa was in September 2017 when, during a speech in New York in front of several African counterparts, he repeatedly distorted the name of Namibia, which he called “Nambia”.

Days before the first posts in January 2018, the US president sparked an international outcry with offensive remarks about African countries, describing them as “shithole countries”.

On January 12, 2018, the Washington Post affirmed that the day before, while speaking with senators on a possible relaunch of the programme to protect immigrants from Haiti, El Salvador and African countries, the American president had made the remark.

The African Union (AU) condemned his description as “hurtful” and “disturbing”. Trump denied the reports, stating that the US deeply respects Africa.