A video has been viewed thousands of times on YouTube and in other online posts alongside a claim it shows incumbent US President Donald Trump smashing the Oval Office after losing the US election in November 2020. The claim is false; the video shows an actor smashing a fake Oval Office for a comedy sketch that first aired on US cable channel Comedy Central in 2017. 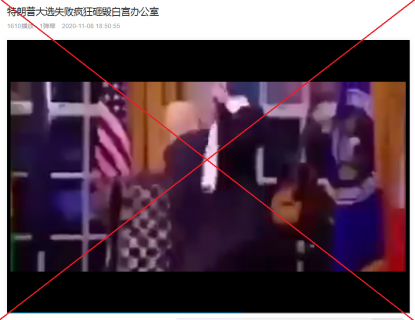 Screenshot captured on November 24, 2020, of the misleading Bilibili video

The post’s simplified Chinese-language caption translates to English as: “Donald Trump lost the election and smashed the office at the White House”.

The post circulated after Democratic challenger Joe Biden won the 2020 US election, as AFP reported here.

The video was also published on Bilibili here, here and here, on YouTube here and on online sites such as here, alongside a similar claim.

Some viewers appeared confused as to whether or not the footage in fact shows Trump.

Their comments translate to English as: “True or false?”; “Is it an actor? Not the real person [Trump]?”

A keyword search found this YouTube video uploaded on the UK channel of US cable channel Comedy Central on July 21, 2017.

The President Show is a television show produced by Comedy Central. The Trump character in the show is played by Anthony Atamanuik.

The same video as the clip in the misleading Bilibili post starts at the three-minute 48-second mark of the YouTube video.

Below are two screenshot comparisons between the Bilibili footage (L) and the YouTube video published by Comedy Central (R): 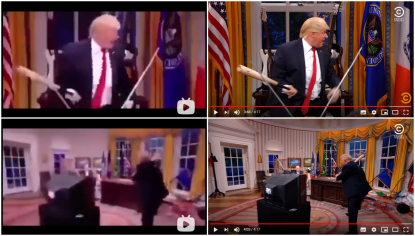