A photograph has been shared hundreds of times on Facebook alongside the claim that it shows victims of a massacre perpetrated against Amharas – one of Ethiopia’s major ethnolinguistic groups – in the northern town of Mai-Kadra, located in the restive Tigray region. However, this claim is false; the image shows victims of a tsunami that hit Thailand and other Asian countries in 2004.

Written in Amharic, the caption translates into English as: “In the town of Mai-Kadra, Amharas are being exterminated. We are dying and begging you to stop.” The post refers to events in Ethiopia, where an armed conflict in the northern region of Tigray has led to mass casualties and the displacement of thousands.

Written in Amharic, the caption translates into English as: “In the town of Maikadra, Amhara's are being exterminated. We are dying and begging you to stop.” The post refers to events in Ethiopia, where an armed conflict in the northern region of Tigray has led to mass casualties and the displacement of thousands. Screenshot of the false claim on Facebook, taken on November 23, 2020

The image shows rows of bodies on the ground, covered with plastic. Two areas of the picture have been obscured in red.

However, this photo is unrelated to the fighting in Ethiopia and, in fact, shows Thai victims of the devastating Boxing Day tsunami that slammed into large parts of Asia and the Far East 16 years ago.

Not bodies from Tigray

A reverse image search shows that the original photo was captured by David Longstreath in Takuapa, Thailand on December 30, 2004. The photo is credited to Associated Press and the caption reads: “Thais walk outside a Buddhist temple Thursday, Dec. 30, 2004, near Takuapa, Thailand, where more than 1,000 bodies have been gathered.”

“These dead were collected from the area,” he said. 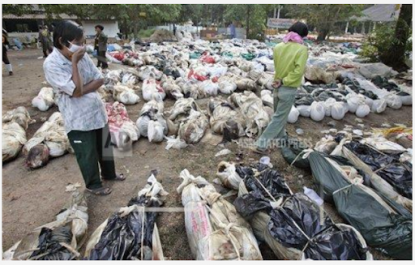 Screenshot from AP of original photograph used in the false Facebook claim, taken on November 23, 2020

The obscured parts of the picture in the misleading Facebook post show people walking among the corpses.

AFP reported that six weeks after the deadly tsunamis caused by a magnitude 9.0 earthquake west of the Indonesian island of Sumatra on December 26, 2004, the number of dead had risen to 295,000.

More than 5,300 of those casualties were reported from Thailand.

Another post from April 2020 used the same image and claimed it showed people who died from Covid-19. AFP Fact Check debunked it here.

According to Amnesty International, hundreds of people were “stabbed or hacked to death” in Mai-Kadra, a town in the South West Zone of Ethiopia’s Tigray Region, on the night of November 9, 2020. 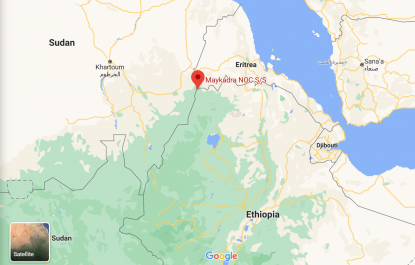 Screenshot from Google Maps showing Mai-Kadra town in the Tigray region on the border of Ethiopia, Eritrea and Sudan

However, UN human rights chief Michelle Bachelet Jeria noted that the Amnesty International claims “have not yet been fully verified” and she urged a full inquiry.

“If confirmed as having been deliberately carried out by a party to the current fighting, these killings of civilians would of course amount to war crimes,” she said.

?? #Ethiopia: Amid emerging reports of mass killings in the town of Mai-Kadra, @mbachelet expresses increasing alarm at rapidly deteriorating situation in #Tigray: "I strongly urge both sides to realize that there will be no winner in such a situation" ? https://t.co/vClDLmDjYW pic.twitter.com/zwSNvYJo0U

A political party from Tigray’s neighbouring Amhara region went a step further with a statement that claimed the victims were Amharas, one of Ethiopia’s largest ethnic and linguistic groups.

“While we expect the details of casualties to be revealed by the federal government, we could confirm that Amhara people living in the town of Maikadra, which is now captured by the defense forces, have been subjected to genocide by the TPLF,” said the Prosperity Party in reference to the Tigray People’s Liberation Front (TPLF).

However, several refugees interviewed by AFP in a Sudanese refugee camp were quoted saying the atrocities were committed by federal army troops.