A photo has been shared thousands of times in multiple Facebook posts alongside a claim it shows bodies of those killed by COVID-19. The claim is misleading; the image is actually an Associated Press photo which shows victims of the December 26, 2004 tsunami in Thailand. The disaster, which became known as the Boxing Day tsunami, devastated more than a dozen countries. 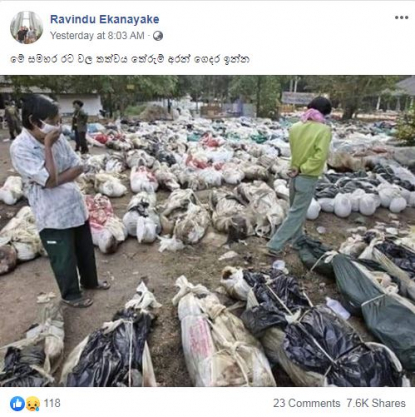 The post's Sinhala-language photo caption translates to English as: “This is the situation in some countries - understand the situation and stay home”.

The posts were published as millions of people worldwide continue to live under “stay home” orders, with governments enforcing lockdowns and closing borders to combat the COVID-19 pandemic. As of April 16, 2020, the World Health Organization has reported at least 130,000 COVID-19 deaths and almost two million infections globally.

But the claims about the photo are misleading.

A reverse Google image search of the photo found that it was published here by the Associated Press (AP), a US-based news agency. The photo's caption states it was taken on December 30, 2004 in Thailand. 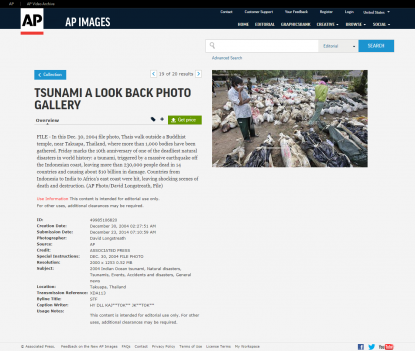 Screenshot of the image in AP Images

The photo description states: “In this Dec. 30, 2004 file photo, Thais walk outside a Buddhist temple, near Takuapa, Thailand, where more than 1,000 bodies have been gathered. Friday marks the 10th anniversary of one of the deadliest natural disasters in world history: a tsunami, triggered by a massive earthquake off the Indonesian coast, leaving more than 230,000 people dead in 14 countries and causing about $10 billion in damage. Countries from Indonesia to India to Africa's east coast were hit, leaving shocking scenes of death and destruction.”

Below is a screenshot comparison of the photo in the misleading post (L) and the AP photo (R) :

Screenshot comparison of the photo in the misleading post (L) and the AP photo (R) :