Skip to main content
German Chancellor Angela Merkel addresses a press conference after taking part in the G20 summit per video from the Chancellery in Berlin on November 22, 2020. (Photo by HANNIBAL HANSCHKE / POOL / AFP)

Multiple posts on Facebook and Korean social media platforms claim that Germany closed 66 Chinese government-funded Confucius Institutes. The claim is misleading; the article referenced in the posts reports that 66 organisations in “the Western states” have individually announced they will cut ties with Confucius Institutes and does not explicitly mention Germany; as of November 25, 2020, the Confucius Institute Headquarters website states there are just 19 Confucius Institutes operating in Germany.

The claim was published here on Facebook on November 23, 2020. 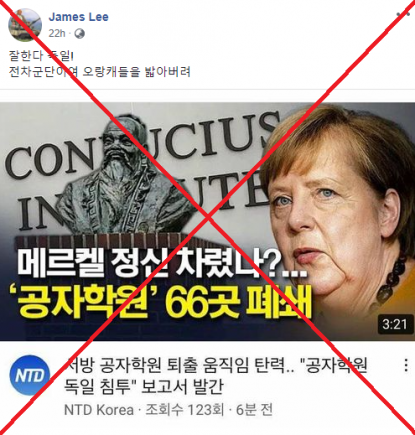 The Korean-language post translates to English as: “Good job, Germany! The tank division, go trample on the [Chinese] barbarians.”

“Tanks division” is a term often used to refer to the German national football team, as seen in this article by South Korean newspaper The Hankyoreh.

Confucius Institutes are Chinese government-funded cultural centres that promote the teaching of Chinese language and culture abroad. According to the Confucius Institutes Headquarters - or Hanban - website, there are some 541 of such centres in operation across the world.

These centres have been mentioned in several recent diplomatic spats, notably between the US and China. In August 2020, the US announced it would require the institutes in the US to register as a foreign mission, after labelling them “an entity advancing Beijing's global propaganda and malign influence campaign on US campuses...Confucius Institutes are funded by the PRC and part of the Chinese Communist Party's global influence and propaganda apparatus.”

The news report featured in the misleading posts was published here on YouTube on November 20, 2020. It was uploaded on a channel for NTD Korea, the Korean service of the US broadcaster New Tang Dynasty Television (NTD).

Part of the Korean-language report states: “By the end of 2020, 63 universities, two governments, and one educational body in the Western states will end their cooperation with Confucius Institutes.

“Of these countries, the US is taking the most hardline approach. US Secretary of State Mike Pompeo vowed to expel all Confucius Institutes from universities across the country by the end of the year. The US also listed the institutes as a foreign mission.

“Germany is also taking action. The University of Hamburg has decided to terminate its agreement with the Confucius Institute. The agreement signed in 2007 will end on December 31, 2020.”

Nowhere in the report does it claim that all “63 universities, two governments, and one educational body” are in Germany.

AFP also found this statement released by the University of Hamburg on July 28, 2020 about the university’s plans to cut ties with the institute.

“The president also asked the Confucius Institutes Headquarters to dissolve the cooperation agreement, which the University of Hamburg had extended in 2018, to 2023.”

The statement did not provide reasons for the termination.

This September 21, 2020 article by German public state-owned broadcaster Deutsche Welle also reports that there are 19 institutes in the country, and that opposition Free Democratic Party may move to seek a parliamentary discussion about a total ban of these centres “soon”. Multiple keyword searches found no credible reports published about the issue since.