An article shared by Nigeria’s ex-minister of aviation Femi Fani-Kayode, and thousands of others on Facebook and Twitter, claims that a man was sentenced to death in Pakistan for breaking wind in a mosque during Ramadan. This is false; the article in question was posted on a website that describes itself as satirical, but the joke has been lost in transit.

Fani-Kayode posted the link on May 17 to the website World News Daily Report, with the caption: “A man is sentenced to death in Pakistan for farting in a mosque during Ramadan. What is the world coming to?”

Fani-Kayode’s post (archived here) was shared by more than 400 people and has over 1,200 comments, many of them blaming Islam for the man’s death or praising Christianity for being a more “merciful” religion. 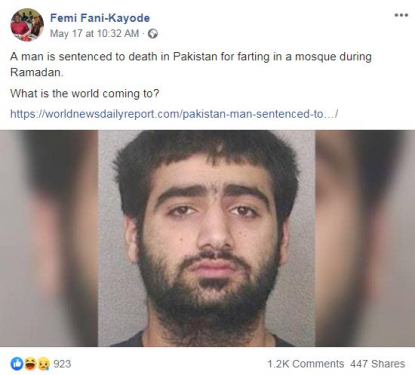 A screenshot taken on May 21, 2019 shows the article posted on Facebook by Femi Fani-Kayode

Fani-Kayode, who has verified accounts on both Facebook and Twitter, also tweeted the same story -- but with no link this time. The tweet was shared by more than 1,800 people. 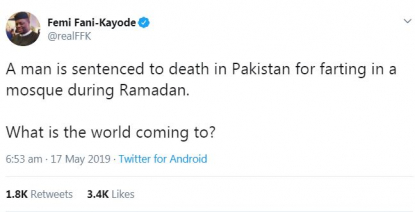 Femi Fani-Kayode also tweeted the story, but without a link

Scannews, a Nigerian website with a history of sharing false information, had last year also picked up the story, which was shared on Facebook more than 600 times.

Following the link to the original article posted on World News Daily Report, we can see that the website’s own social media counter claims it has been shared at least 160,000 times. But Crowdtangle, a social media tracker owned by Facebook, indicates that the article had been shared only 14,724 times as of May 21, 2019.

According to CrowdTangle, the top sharer is the Facebook page “No sharia law - Never ever give up Australia”. The June 2017 post has been shared at least 1,000 times. Again, many of those commenting on it took the post at face value, saying it was proof of the brutality of Islam.

But a close look at the World News Daily Report website shows that it bears the tagline: “Where facts don’t matter”. 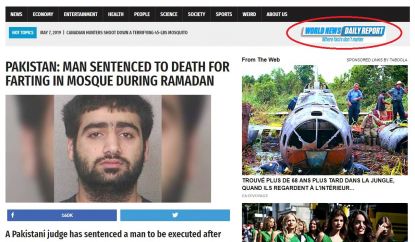 A screenshot taken on May 21, 2019, showing the tagline for the satirical website where the post originated from

In addition to this, the website carries a disclaimer stating that all its stories are satirical and fictional in nature.

“World News Daily Report assumes all responsibility for the satirical nature of its articles and for the fictional nature of their content,” it reads.

As for the man seen in the photo in the article, a reverse image search led us to this story in the Ottawa Citizen, a Canadian newspaper.

It names the man as Behnam Yaali, who was sentenced to 13 years in prison in June 2018 for killing his ex-girlfriend Christina Voelzing.

The photo of Behnam Yaali, as it appears on the website of the Ottawa Citizen