Lists making the rounds on social media claim to show the names of some Nigerian politicians banned from entering the United States for interfering in February’s elections, won by President Muhammadu Buhari. The US embassy in Abuja confirmed to AFP that the US has not and will not release such a list.

One such list, archived here, says “BREAKING: It's now official that the following people's are banned from entering US For rigging 2019 Elections”. All of the politicians on the list supported Buhari’s re-election bid. The list also includes two university professors who served as returning officers. They declared the Independent National Electoral Commission’s results in Osun and Kano states -- both won by Buhari’s All Progressives Congress (APC). 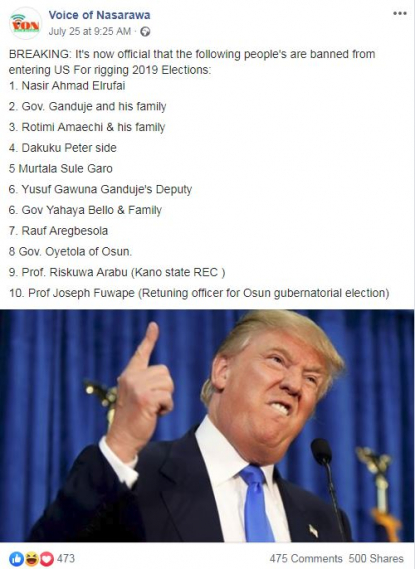 Tweets by groups in support of the opposition Peoples Democratic Party, which is challenging Buhari’s victory, have also shared the list. Two such tweets, archived here and here, have between them been shared nearly 1,000 times.

The list was also published by Nigerian blogs and online newspapers, including Scannews, a website with a reputation for misinformation. We’ve archived a couple of these posts here and here.

The US has imposed visa restrictions over the elections, but we don’t know who has been targeted

Prior to the 2019 general election in Nigeria, the US warned that it would “be paying close attention to actions of individuals who interfere in the democratic process or instigate violence against the civilian population before, during, or after the elections”.

In a joint statement with the UK government in January, the US said “we will not hesitate to consider consequences -- including visa restrictions -- for those found to be responsible for election-related violence or undermining the democratic process. Under U.S. immigration law, certain violations may also lead to restrictions on family members.”

The US government announced in July that it had made good on this threat, issuing a statement saying that “the Secretary of State is imposing visa restrictions on Nigerians believed to be responsible for, or complicit in, undermining democracy in Nigeria”. It did not name the individuals affected by the visa restrictions, or say how many people had been targeted.

These individuals, the US said, “have operated with impunity at the expense of the Nigerian people and undermined democratic principles and human rights”.

It was after this statement was released on July 23 that the lists of politicians supposedly targeted by the visa restrictions began making the rounds on social media.

AFP reached out to the US embassy in Abuja to verify these lists. The embassy press office said visa records are confidential, and have not been released by the US government. The embassy did not disclose to AFP the names of any of the Nigerians subjected to visa restrictions.

“We emphasize the action we are announcing is specific to certain individuals and not directed at the Nigerian people or the newly elected government,” the embassy said via email.

“Under U.S. law, individual visa records are confidential, and we cannot provide details as to who is or will be affected.”

Therefore, publicly releasing the names of Nigerian politicians banned from entering the US would be a violation of the country’s law.

The embassy’s carefully-worded statement said the visa restrictions did not target “the newly elected government.'' The lists circulating online, predominantly made up of politicians from the newly-elected governing party, should therefore be treated with great scepticism.