Multiple posts shared thousands of times on Facebook alongside a picture of rusty oldtimers claim to show the garage of a former Nigerian senior politician. This is false: AFP Fact Check found that the photo depicts a range of vintage cars that once belonged to a business magnate in France. A Paris-based auction house confirmed it had taken the image as part of a publicity campaign to sell the collection of 60 vehicles in 2015, which it did for a record-breaking 25 million euros ($29 million).

The post features an image of several old cars stored outside under a makeshift garage and has been shared hundreds of times here on a Facebook page called George Udom.

“This is the CAR GARAGE of the third Senate President of the Federal Republic of Nigeria, Dr. Nwafor Orizu (1963-1966),” the post reads. “If you know the worth of these vehicles then and how valueless they are today, you will realize that the best thing to do in this life is to build people around you and stop acquiring what will finish and become valueless even when you are alive.” 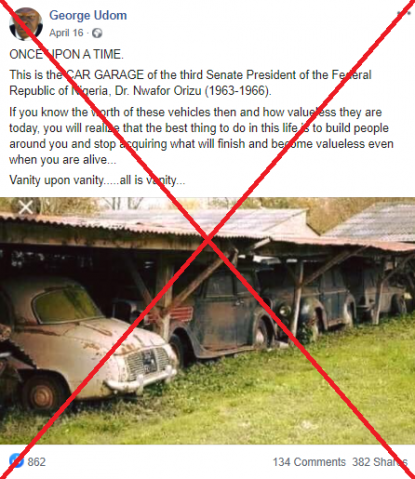 Nwafor Orizu, a lawyer and academic, was Nigeria’s first post-independence senate president and acting president for 92 days from late 1965 to early 1966. He died in 1999.

The page George Udom has a history of publishing misinformation, including these debunks by AFP Fact Check here and here.

Other posts also making claims about Orizu and the cars have been shared here, here and here.

The claims are false. AFP Fact Check found that the collection of cars had nothing to do with Orizu, nor were they worthless.

Multiple reverse image searches led us to news articles featuring the picture as part of a story about French transport entrepreneur and car enthusiast Roger Baillon who once owned the vintage cars seen in the image.

This article by CNN reveals the photo was taken by French auction house Artcurial as part of a bid to sell off the cars in 2015.

The story was also picked up by automobile news websites Autoweek and Driving.

Artcurial confirmed that the image had been shot as part of a campaign for its auction.

“This picture was taken as part of the Discovery of the Baillon Collection, sold by Artcurial Motorcars in 2015,” Artcurial spokeswoman Aurelia Adloff told AFP Fact Check.

The auction house explained that Baillon had assembled his pre-war automobile collection during the 1950s with the aim of restoring them for housing in a museum. But his dream ended when his business suffered setbacks two decades later.

The cars went to ruin on Baillon’s estate in western France until they were discovered by his grandchildren, who contacted Artcurial in 2014.

The collection, which included brands like Bugatti, Ferrari and Maserati, fetched a record-breaking 25 million euros at Artcurial’s  February 2015 auction.