A photo of a flower has been shared tens of  thousands of times in multiple Facebook posts that claim it shows a “Himalayan flower that only flowers every 400 years”. The claim is false; the photo in fact shows a white king protea flower, the national flower of South Africa.

The claim was shared to Facebook by a Fiji-based user here. It has been shared more than 180 times. 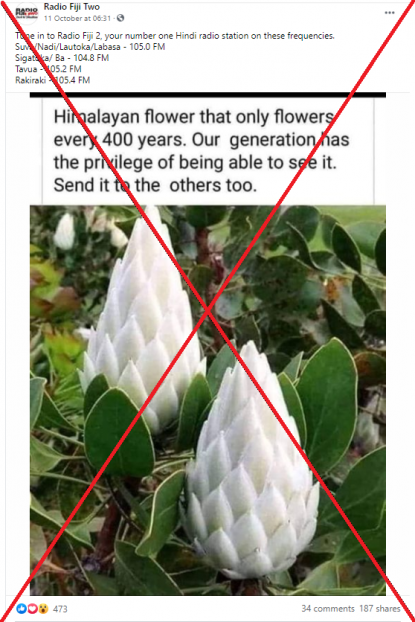 The text superimposed on the image reads in part: “Himalayan flowers that only flowers [sic] every 400 years. Our generation has the privilege of being able to see it.”

Similar Facebook posts were published to Facebook, here, here, here and here. Collectively they have been shared tens of thousands of times on the platform.

A Google image search for “white king protea flower bud” also found multiple other images that show similar or exactly the same flower that is seen in the Facebook post and the Chinese blog post. Examples can be seen here, here and here.

The king protea, or protea cynaroides, grows throughout the southern parts of South Africa and has a number of different colours and leaf shapes across varying subspecies. It is also the country’s national flower.

The king protea blooms at different times throughout the year depending on habitat and climate, according to the South African National Biodiversity Institute.