An image of a boy in a green sweater cleaning a blood-smeared floor has been shared multiples times on Facebook and Twitter alongside captions claiming that it shows a Palestinian child mopping up the blood of his family members who were killed in Gaza. The claim is false; the photo has been online since 2012 and is unrelated to the latest Israeli-Palestinian conflict.

“Palestinian boy cleaning his own family's blood,” reads the Facebook post, which has been shared more than a dozen times since being published on May 15, 2021.

A tweet posted on May 14, 2021, shared the same picture alongside the caption: “A child wipes the blood of his father and his brothers who were martyred last night by the Israeli agression against the Bedouin village in Northern Gaza. the picture is talking (sic)”.

A reverse image search located the picture on the 500px website, an online photo-sharing platform, based in Canada, where the image was posted nine years ago.

The copyright description on the website credits the picture to a photographer in Jerusalem identified as Rj Stitt. The caption reads: “Palestinian Kid cleaning up after the slaughter of a cow in his parents slaughterhouse, Nr Ramallah, Palestine”. 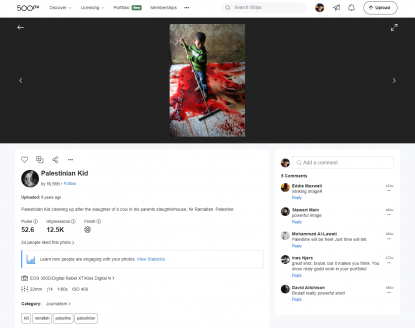 Ramallah is a Palestinian city near Jerusalem in the West Bank and not in Gaza, where some of the posts claimed the child's family was killed.

AFP Fact Check contacted both Stitt and 500px and will update this fact check if we receive a response.

On May 10, Israel launched airstrikes on the Gaza Strip in response to rocket fire from Hamas, the Palestinian militant group that controls Gaza. The armed conflict erupted after Israeli forces cracked down on Palestinians in Jerusalem.

Israel's bombing campaign has killed more than 200 Palestinians, while the Hamas rocket barrage claimed 12 lives in Israel, according to officials on both sides.