The image has been doctored to add a Palestinian keffiyeh scarf

As deadly violence escalated between Israel and Palestinian militants, Facebook, Instagram and Twitter posts shared a photo they claim shows Hollywood actress Kristen Stewart wearing a scarf she purportedly received from a Palestinian fan. The claim is false: the image has been altered to add the scarf.

Text across the top of the image reads: “Twilight star Kristen Stewart extends her support to Palestine”.

The image features a purported Facebook post from Stewart which says: “Two years ago, I got this scarf as a gift from one of my Palestinian fans. Now I’m shocked when I knew that he died by Israilian attack. Stop killing Palestinian people, Enough is Enough #GazaUnderAttack #FreePalestine (sic)”. 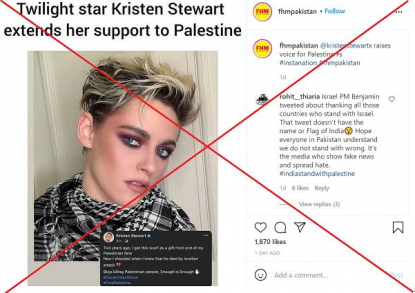 Stewart is known for her role as Bella in The Twilight Saga.

The posts circulated as tensions escalated between Israel and Palestinian militants. More than 200 Palestinians, including 61 children, have been killed since hostilities flared between the Jewish state and armed Palestinian groups in the Gaza Strip, according to local authorities.

The claim, however, is false: the image has been altered to add the scarf.

Below is a comparison of the altered image (L) and the original without the scarf (R): The Facebook caption on the altered image is from an account in Kristen Stewart’s name, which has been taken down.

However, the account did not belong to the actress, who does not use social media.

The page was created in 2013 under the name of Sean Porter and its name changed frequently, according to Egyptian media outlet Ahram Online.

Below is a screenshot of the Facebook page’s transparency settings shown in the Ahram Online article: Screenshot of the Facebook page transparency settings shown by Ahram Online. Taken on May 18, 2021.