Muslim woman wearing hijab in photo is not a daughter of former US president George W. Bush

Facebook posts with an image of a woman wearing a hijab claim to show one of former US president George W. Bush’s daughters, who allegedly converted to Islam. The claim is false; the woman in the picture does not resemble either of Bush’s twin daughters. Although AFP Fact Check is yet to confirm the woman’s identity, she appeared in video clips from 2014 described as a “Romanian woman converting to Islam”.

“I wonder if African Christians knows the bible than the White people. Daughter of George W. Bush converted to Islam... Masha Allahu (sic),” reads a Facebook post published on May 8, 2021. 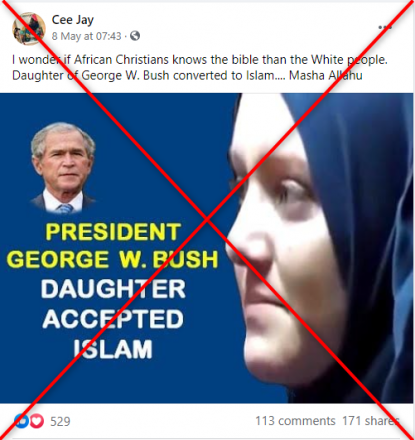 The same claim was shared on Facebook here, here and here.

AFP Fact Check found it is an old claim that circulated in the form of a video in 2017, 2018 and 2019 showing a man in a black-and-white striped shirt speaking Romanian to a woman wearing a navy blue hijab.

The woman is identical to the person in the picture being shared on Facebook. Captions on the videos also claim that she is Bush’s daughter.

The footage shows the man in a black-and-white striped shirt talking to the woman about Islam. Later, the two say the prayer of conversion into the religion, according to a translation provided by an AFP reporter in Romania.

But the woman in the video does not resemble any of Bush’s daughters.

The 43rd president of the United States is a father to twin daughters:  Barbara Pierce Bush and Jenna Bush Hager. While the former is a healthcare activist and the co-founder of the Global Health Corps, the latter works as a  journalist for the American television network NBC News.

A comparison of the Bush twins to the woman in the video wearing a hijab reveals no resemblance at all.

There is no official record of either of Bush’s daughters converting to Islam. AFP Fact Check contacted the former president’s office concerning the claim and this report will be updated once we get a response.

AFP Fact Check has been unable to identify the woman in the video. Please contact us at factcheckeditorsAfrica@afp.com if you know who she is.