Footage of “bodies” in shrouds shows Egyptian protesters in 2013, not faked deaths of Palestinians in Gaza

A video viewed thousands of times on Facebook has been shared alongside claims that it shows a staged display of corpses by Hamas in Gaza intended to gain global sympathy and portray Israel in a bad light. This is false. The video actually shows a protest by supporters of the Muslim Brotherhood in Cairo, Egypt about eight years ago and is unrelated to the Israeli-Palestinian conflict.

The video was shared in a Facebook post alongside a caption that claims it is evidence of “Hamas propaganda”. 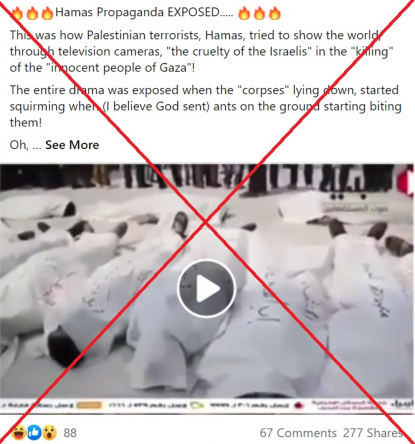 A screenshot taken on May 20, 2021 showing the false post

“This was how Palestinian terrorists, Hamas, tried to show the world, through television cameras, ‘the cruelty of the Israelis’ in the ‘killing’ of the ‘innocent people of Gaza’!,” the caption reads. “The entire drama was exposed when the ‘corpses’ lying down, started squirming when (I believe God sent) ants on the ground starting biting them!”

The video shows a row of people on the ground, wrapped in white shrouds, giving the impression of a mass funeral service. Then, some of the “corpses” begin to move.

The same video was shared here, here and here with captions making similar claims that it was recorded by Hamas in Gaza in 2021. This post here mocks the Islamist movement by saying its “dead” fighters can’t stay still in front of the camera.

AFP Fact Check traced the video - which has been shared across many regions and languages, including Serbian, German and Czech - and determined that it was filmed in Cairo, Egypt in 2013, and not in Gaza during the latest conflict with Israel.

Reverse image searches of screenshots from the video led to Italian and Austrian fact checks from 2017 and 2018, both predating the 2021 Israeli-Palestinian crisis. The video was also used out of context at the time, with claims that it showed staged fatalities in the Syrian war.

The original video was uploaded to YouTube by Egyptian news site "Elbadil" on October 28, 2013. According to Elbadil, the video was filmed at a demonstration by Muslim Brotherhood students at Al-Azhar University. The Muslim Brotherhood is a religious and socio-political organisation that supports the application of Islamic law in virtually all aspects of human life.

The students were protesting against the military in front of the college administration building in Cairo, Egypt

The students, in support of Muslim Brotherhood, then staged the protest seen in the video. AFP Fact Check translated some of the inscriptions on the white shrouds to mean "martyr".

Another YouTube video shows the protest scene in more detail. It was uploaded by Egyptian newspaper "Akhbar el-Yom" on October 28, 2013 – the same day the initial video was put online.

AFP photographer Khaled Kamel also took pictures of the October protests in 2013. One of his images shows a building visible in the video uploaded by Akhbar el-Yom. 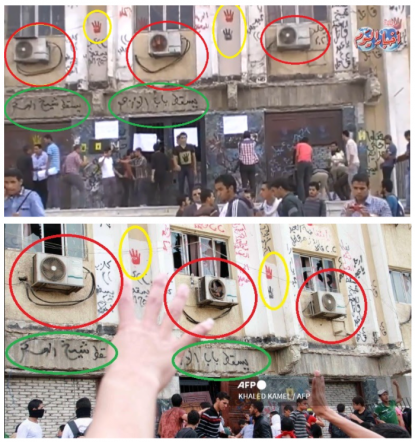 Screenshots taken on May 20, 2021 from the video by Akhbar el-Yom TV and an AFP photo by Khaled Kamel showing students at Al-Azhar University in Cairo blocking the entrance to an administration building in October 2013.

In both screenshots, we see the same air conditioning units (marked in red), the R4bia symbol of a hand with four outstretched fingers on the walls(marked in yellow), and Arabic slogans (marked green).

The windows in the AFP photo are broken, but they appear intact in the screenshot from the video. This is because the video was filmed on October 28, 2013 when the protest began, while the AFP photo was taken two days later after tensions escalated.

The video has nothing to do with the Israel-Palestine crisis of 2021, which has been extensively reported by AFP here and here.