Nevada has not stopped counting votes

A tweet claims US battleground state Nevada has stopped counting votes in the presidential election until November 5, two days after polls closed. This is false; a Nevada department of state spokeswoman said the elections division will continue counting ballots all day, but updates to the results will not be released until November 5.

“Nevada just decided to stop counting ballots until THURSDAY. What the he** is going on in America!?” reads a November 4, 2020 tweet by Evan Kilgore, who describes himself as a conservative political commentator and has more than 78,000 followers. 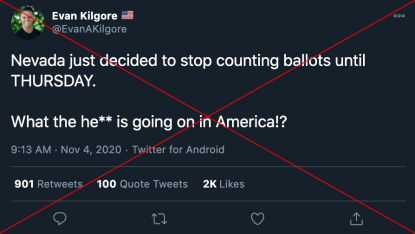 Screenshot of a tweet with a false claim, taken on November 4, 2020

“We did not stop counting ballots at all,” Jennifer Russell, public information officer for the Nevada secretary of state’s office told AFP on November 4.

“Counties are busy counting today” and will not be stopping to update online results, with the possible exception of Washoe and Clark counties, Russell explained by phone.

She said that frequent pauses to update results interrupt and delay the process, and the counties “just need to be counting today.”

Russell said the confusion likely resulted from a Nevada elections division tweet announcing that result updates -- but not ballot counting -- would be paused until the morning of November 5.

In Nevada, one of the most contested states in the presidential race, mail ballots that will be received over the next week and provisional ballots are still left to be counted.

Kilgore’s claim is part of a larger pattern of right-wing distrust of the American voting process.

Trump, who overnight prematurely declared himself the winner of Tuesday's election, has spent months denouncing mail-in ballots, making unsubstantiated claims that they are liable to fraud.