Skip to main content
A woman wears an "I Voted Today!" sticker after casting her ballot early at City Hall in Philadelphia, Pennsylvania on October 7, 2020 (AFP / Gabriella Audi)

A tweet claiming to show a polling violation in Philadelphia, Pennsylvania has been retweeted more than 8,000 times on election day. The tweet is misleading; the city’s district attorney’s office said an investigation had shown there was no breach of state guidelines.

“This is our polling place in NE Philadelphia. Already a violation in sight,” a columnist for conservative outlet Newsmax tweeted on Election Day morning, November 3, 2020.

The tweet includes images of a sign on a Philadelphia high school being used as a polling location. 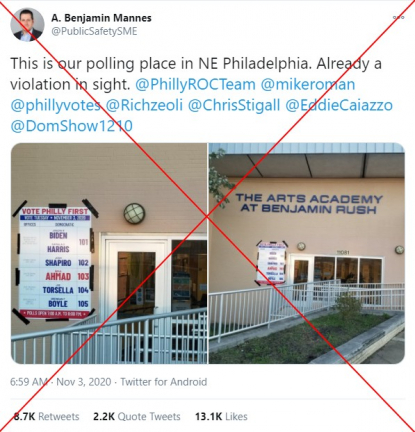 President Donald Trump and his campaign have repeatedly warned, without evidence, of possible fraud in Pennsylvania, and this tweet, spread by a campaign staffer, is another example.

But the office of District Attorney Lawrence Krasner tweeted that the claim is “deliberately deceptive.”

“Members of our Election Task Force have investigated this allegation. This polling place is located in an interior room and the sign in question is further than 10 feet from it,” the tweet said.

Pennsylvania’s  Department of State requires that “electioneering material must be located at least 10 feet away from the entrance to the room where voting occurs,” referring to campaign pamphlets or paraphernalia.