A video has been viewed thousands of times in multiple Facebook posts alongside a claim it shows French products being dumped from several lorries following calls for a boycott on them by Muslim nations in October 2020. The calls for a boycott came after French President Emmanuel Macron criticised Islamists and vowed not to "give up cartoons" depicting the Prophet Mohammed following a terrorist attack in a suburb outside Paris. The claim, however, is false; the video has circulated since 2016 in reports about spoiled chicken being discarded in Saudi Arabia.

The footage was published on Facebook here on November 1, 2020. The post has been shared more than 1,500 times.

The post’s Tamil-language caption translates to English as: “Masha Allah, the scene shows discarding of items made in France, the country which insulted our loving prophet”. 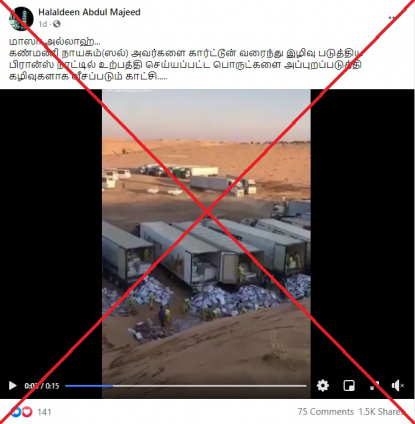 There were calls for a boycott of French goods in various Muslim countries in late October 2020 after Macron criticised Islamists following the beheading of a French teacher who showed cartoons of Prophet Mohammed, as AFP reported here.

The footage was also shared alongside a similar claim on Facebook here and among Indonesian Facebook users here and here.

The footage was published on YouTube here on November 16, 2016. The same footage can be seen from the video’s 39-second to 54-second mark.

The post’s Arabic-language caption translates to English as: “Al-Qassim municipality discarded 25 trucks loaded with chicken unfit for human use that were on their way to distribution.”

Below is a screenshot comparison of the footage shared in the misleading posts (L) and the YouTube video (R): 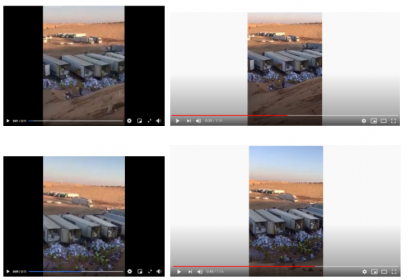 The discarding of chicken was also reported by Al Arabiya, a major news outlet in the Middle East, here on November 17, 2016.

The report’s headline is titled: “Video shows Saudi Arabia getting rid of 80,000 packs of ‘spoiled chicken’”.

The article reads: “Another video is currently making the runs on Saudi Arabia’s social media, this time of officials getting rid of thousands of packaged chickens.

“The video shows around 25 trucks parked in the desert with workers unloading and bizarrely tossing away thousands of packs of chicken.

“It is all part of an official operation under the supervision of the Secretariat of al-Qassim region to dispose around 80,000 packs of expired chicken not fit for human consumption.”

Screenshot of the Al Arabiya - a major news outlet in the Middle East - article published on November 17, 2016