Skip to main content
Voters line up to cast their ballots in Phoenix, Arizona, on November 3, 2020 (AFP / Olivier Touron)

Claims are circulating online that voters in the US state of Arizona were pushed to use Sharpie pens to fill out their ballots in a bid to make them illegible. But officials said using a Sharpie would not invalidate ballots in the state, while voters also had the option of bringing their own pens.

“Arizona. The poll workers were taking the pens from voters and making them use Sharpies. Sharpies bleed through. All of the votes marked with Sharpies couldn't be read,” said a November 4, 2020 Facebook post. 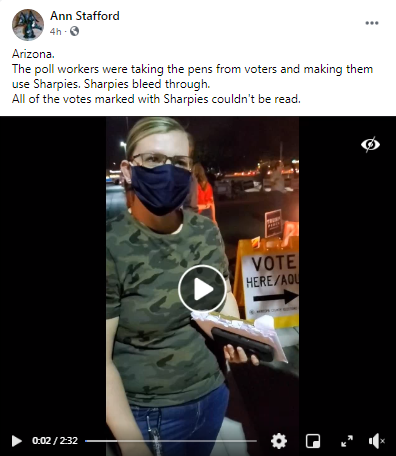 The post is accompanied by a video in which a man speaks to a woman who claims ballots of voters who used Sharpies were not read, and that poll workers were trying to force people to use them rather than pens.

The video pushes the idea that there was a concerted effort to not count votes for US President Donald Trump, who is trailing his Democratic rival Joe Biden in the state as of 2100 GMT on November 4.

“People are coming here to vote for Donald Trump, and those votes are all getting invalidated,” the man says.

Trump, his campaign and his supporters have repeatedly made unfounded allegations of voter fraud, casting doubt on the results and laying the groundwork for legal challenges.

The claim that using a Sharpie will invalidate a ballot is false.

“IMPORTANT: If you voted a regular ballot in-person, your ballot will be counted, no matter what kind of pen you used (even a Sharpie),” Secretary of State Katie Hobbs tweeted on November 4.

The elections department for Maricopa County -- the most populous in the state -- also tweeted on its official account ahead of the vote that Sharpies were acceptable, and that ink bleeding through the ballot would not impact counting.

“MARKING YOUR BALLOT: Did you know you can use a black or blue ballpoint pen and even sharpie to mark your ballot? Even if there is bleed through it won’t impact counting because our upgraded ballots have off-centered columns and our new tabulators only read the ovals,” the department wrote.

A video included in the tweet says that fine-tipped Sharpies are used at polling places “because it’s the fastest-drying ink and works best on the tabulation equipment.”

The government of Pima County, another populous area in Arizona, described the “felt-tip pen ballot controversy” as “false.”

“The felt-tip pen ballot controversy burning through social media is false. Don't get caught up in it. Arizona ballot tabulating machines can read ballots marked with a felt tip pen. Felt pens are discouraged because the ink can bleed through,” it tweeted.

Voters in Arizona were also not only permitted but encouraged to use their own pens because of the Covid-19 pandemic.

“Bring (your) own pen, wear a face covering and maintain a social distance of at least six feet from others,” said an Election Day statement from Hobbs.

Hobbs also tweeted that: “You may use a pen on your ballot. In fact, voters are encouraged to bring a pen to voting locations to minimize contact with surfaces others may have touched. Some voting locations have single-use pens available. Bringing a pen will help keep you safe and minimize waste.”