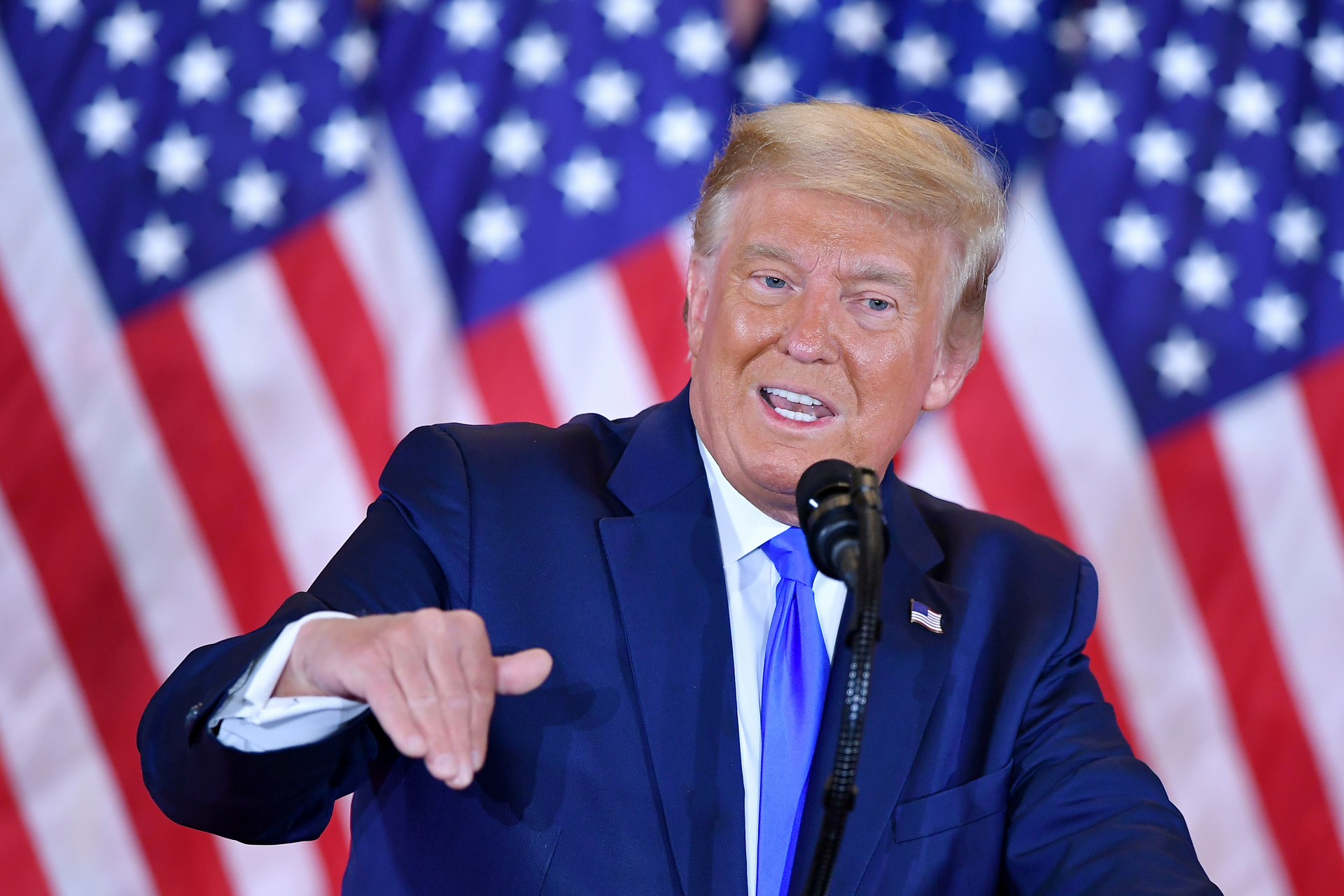 US President Donald Trump speaks in the East Room of the White House in Washington, DC early on November 4, 2020 (AFP / Mandel Ngan)

In an early morning address from the White House, after polls had closed but while ballots were still being counted in battleground states, US President Donald Trump falsely declared that he had won re-election.

His remarks came hours after a tweet in which he said: “We are up BIG, but they are trying to STEAL the Election. We will never let them do it. Votes cannot be cast after the Polls are closed!” 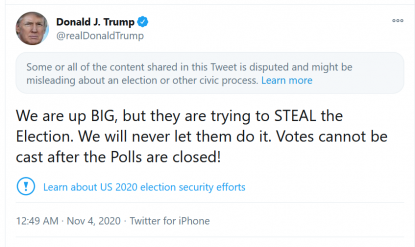 Trump had a significant lead in Pennsylvania and tighter advantages in Michigan and Wisconsin as the polling day of November 3 drew to a close, according to US television networks.

But Twitter flagged the post, saying the information it discussed was disputed given the incomplete results. Trump’s opponent Joe Biden had earlier said he was confident of overturning the president’s advantage in the Midwest states.

“I want to thank the American people for their tremendous support, millions and millions of people voted for us tonight. And a very sad group of people is trying to disenfranchise that group of people and we won’t stand for it.”

State officials are tallying votes that were legitimately cast for both candidates before polls closed. Millions of ballots were sent by mail or deposited at official drop boxes. There is no evidence -- nor did Trump offer any -- that people who voted for the president are being disenfranchised.

The vote count in Georgia was incomplete, with tallies in several Democrat-leaning urban centers around the state capital Atlanta yet to come, when the president spoke. At 2300 GMT on Wednesday, no television network had called Georgia for either Trump or Biden, and the gap had narrowed to 1.7 percent with a total of seven percent of votes still to be counted.

“We’re up 690,000 votes in Pennsylvania. These aren’t even close… with 64 percent of the vote in, it’s going to be almost impossible to catch.”

Trump was leading strongly in Pennsylvania and his advantage leaves Biden facing a hard climb to take the state. However, uncounted ballots on Wednesday remained in seven figures well into Wednesday and those votes were cast in traditionally Democratic-heavy areas.

No television network or the Associated Press, the main US news agency that compiles vote returns, has declared an overall winner, saying the Trump-Biden contest is too close to call. Therefore, Trump’s declaration of victory was premature.

Trump, without evidence, has for months criticised mail-in ballots, saying it will lead to fraud and a rigged election. AFP fact-checked several such claims here.

Americans relied on postal voting -- which is expected to favor Biden -- in unprecedented numbers in 2020 because of the coronavirus pandemic. Many votes that remain to be counted were cast early, which could eliminate Trump’s advantage built up by high in-person voting on November 3.

After his speech, Trump reiterated his claims on Twitter, writing: “Last night I was leading, often solidly, in many key States, in almost all instances Democrat run & controlled. Then, one by one, they started to magically disappear as surprise ballot dumps were counted. VERY STRANGE, and the ‘pollsters’ got it completely & historically wrong!” “We’ll be going to the US Supreme Court. We want all voting to stop. We don’t want them to find any ballots at four o’clock in the morning and add them to the list. We will win this and as far as I am concerned we already have won it,” Trump said in the White House speech.

After it became clear that Biden had overtaken Trump in Wisconsin, the president's team announced plans to seek a recount. The Trump  campaign also said it was taking action to stop votes being counted in Pennsylvania.

US networks later called Wisconsin and Michigan for Biden but Pennsylvania remains undeclared.

Any legal challenge by Trump’s Republican Party would have to be pursued in individual states or at a federal level before it could reach the Supreme Court.