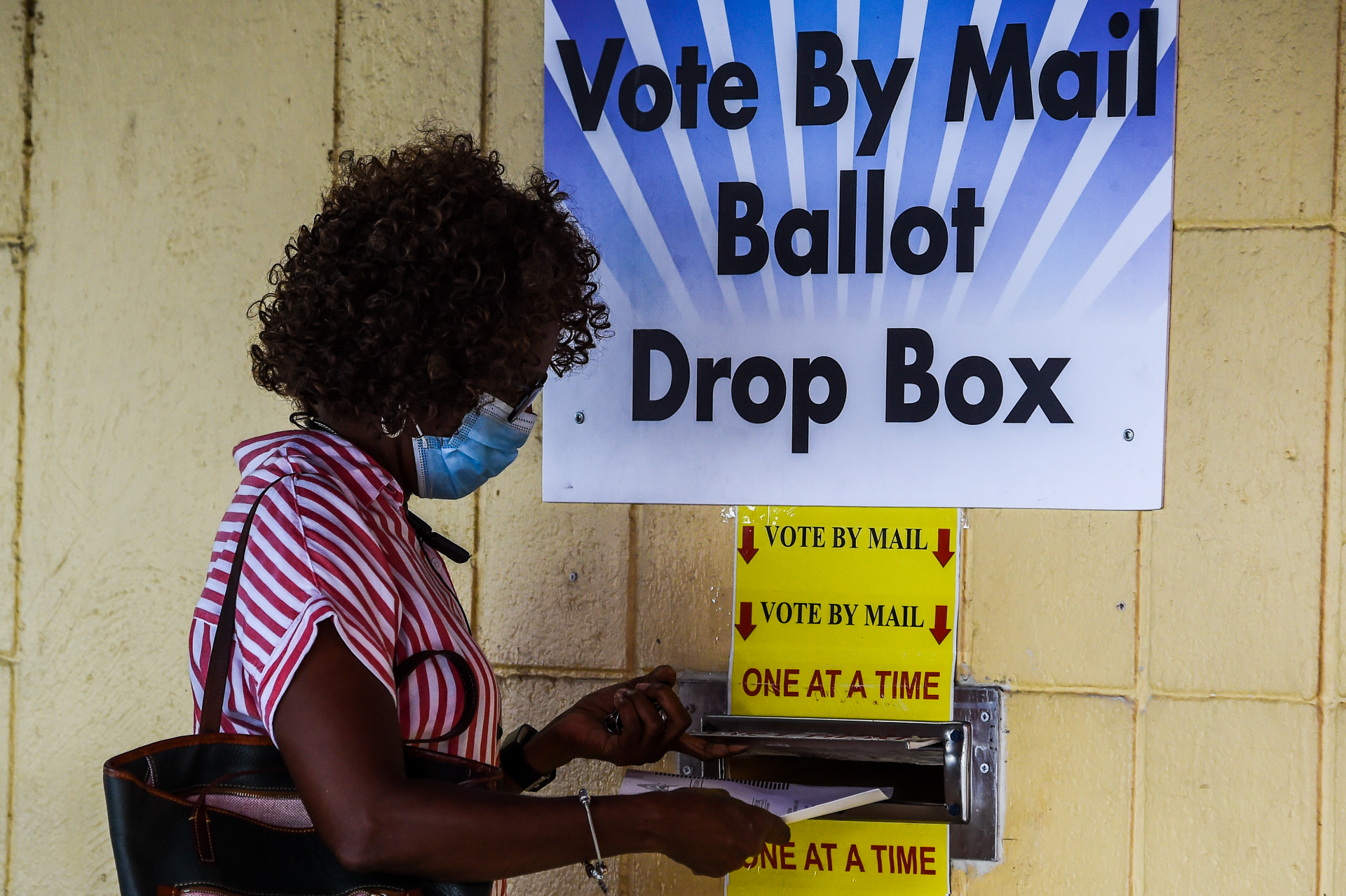 A woman drops her ballot by mail at the Broward County Supervisor Of Elections Office in Lauderhill, Florida on October 5, 2020 (AFP / Chandan Khanna)

Social media users, including one of US President Donald Trump’s sons, are citing isolated cases of mail-in ballots being sent in error as evidence of the potential for widespread voter fraud. This is misleading; election officials say steps including signature verification prevent imposters from returning ballots in place of another voter.

“Strange how this keeps happening,” Donald Trump Jr wrote in an October 1, 2020 tweet sharing a photo of eight mail-in ballots allegedly sent to an apartment in Washington, DC, adding: “What’s to stop someone from filling all of these out and returning them?” 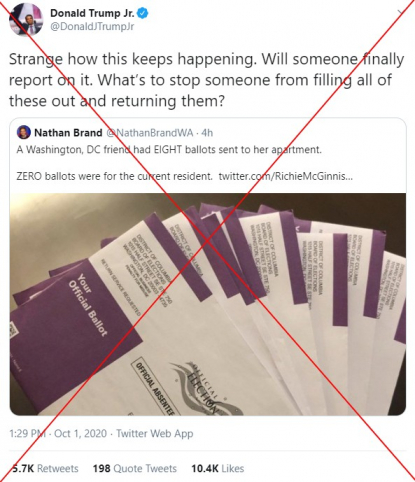 The president has contributed to fears that mail-in voting in the 2020 election will lead to massive fraud. However, experts say the system is safe, and some states, such as Washington, have been conducting mail-in voting on a large scale for years.

Other posts highlighted similar problems with mail-in ballots on social media over the last week of September, pointing to the alleged potential for fraud.

AFP Fact Check looked into each case. In instances where ballots were in fact sent in error, election officials said that measures such as signature verification would stave off the threat of voter fraud.

Signature verification is done automatically by machines, or manually by humans in some counties.

The biggest threat is not overcounting but undercounting, as some ballots can be rejected if voters change signatures, Theodore Allen, an Associate Professor of Engineering at The Ohio State University, who worked on several election projects, told AFP by email.

The tweet shared by the president's son refers to another account that claims a friend received eight ballots, all of which were addressed to previous tenants, and none to her.

This occurred because, in response to the Covid-19 pandemic, the DC Board of Elections (DCBOE) decided to automatically send mail-in ballots to voters registered in the District in the first week of October.

Previous tenants who did not register their change of address will receive ballots, but the current residents would not be able to fill them in in their place, Nick Jacobs, a spokesman for the DCBOE, told AFP by phone.

“The simple answer is that it can’t happen, we have a signature verification. If it’s not signed or the signatures don’t match, it’s not processed,” Jacobs said, adding that situations such as the one described in the tweet are “happening a little bit,” particularly in group house settings when people forget to change their address.

People voting by mail can track their ballot on the DCBOE’s website, and find out whether their signature has been accepted.

“I got proof. My grandfather passed away December 31, 2014. We just got his ballot today,” text accompanying a photo of an envelope from New Mexico’s Dona Ana County Bureau of Elections says in a Facebook post.

“Is this why NM is a Democratic state ?” the post asks. 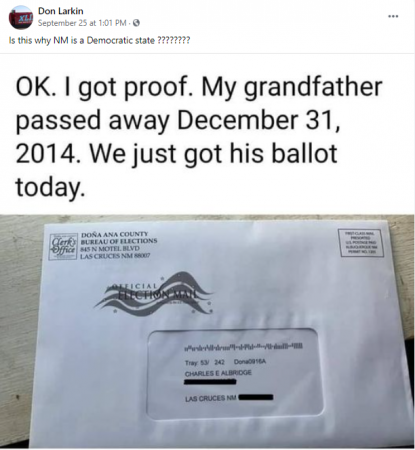 However, according to Dona Ana County Clerk Amanda Lopez Askin, the envelope actually shows a mail-in ballot application. Due to the Covid-19 pandemic, these applications were automatically sent to all voters in 10 of the state’s 33 counties, including Dona Ana, ahead of the general election.

In past years, ballot applications were not automatically sent. New Mexico’s Senate Bill 4, signed into law in June 2020  granted county clerks the right to choose to apply this practice.

“It’s really unfortunate that rampant misinformation on a very innocuous application that is sent for voters’ convenience is being used as a claim of voter fraud,” Askin said by phone.

Askin said that chances of fraud in this case were slim. A person would have to provide “very specific information” as well as the voter’s signature, which would then be compared at the county clerk’s office and rejected if proven falsified.

Another Facebook post alleged that a woman in the Wisconsin city of Oak Creek had received two ballots ahead of the general election. The Facebook user advised everyone to “vote in person” because “this vote is going to be a scam!” 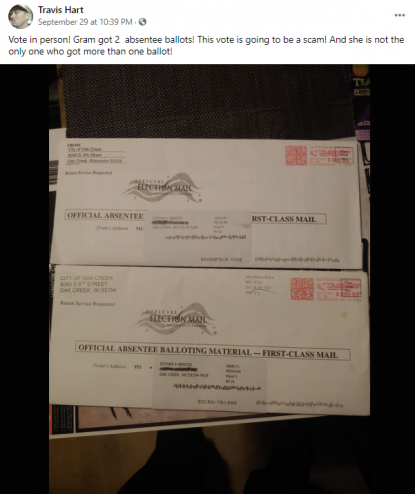 But the photo actually shows a ballot for the November 3 general election as well as one for the August primary, Oak Creek city clerk Catherine Roesk said by phone.

The date on the bottom envelope in the photo is  from June 2020, which indicates it was for a prior election.

“We didn’t even have ballots for this (November 3) election until the 17th of September so… busted,” Roeske said.

“This is how rumors get started,” she added, expressing frustration that all the money her city spent on mailing voting material could lead to such an accusation.

Roeske looked into the voting registry and said it showed that the person named on the ballots in the photo had indeed received two ballots, and had not sent back the June one.

Even had someone received two ballots, they could only have voted once, Roeske said. Each ballot has a barcode that allows the board of elections to count every vote using machines. “We take that tracking information, and it shows the ballot’s received,” she said. As in other states, signatures are also verified.

Unlike the New Mexico case, the ballots in those photos are indeed proper mail-in ballots, not applications. “I’ve seen the same story all over the state,” Paula Sollami Covello, Mercer County Clerk, said by phone.

These situations occur “because the registration offices rely on getting a letter notifying them someone’s passed away,” she said. Those deceased individuals were always registered as voters, “but it’s only this year that it was discovered because we were mandated to send everybody a ballot.”

In prior years, New Jersey residents would have had to request a mail-in ballot, but in light of the pandemic, an executive order by Democratic governor Phil Murphy required election officials to automatically send ballots to all active registered voters.

Covello, who has administered New Jersey’s mail-in voting since 2009, says these errors don’t threaten the integrity of the vote. “It’s worked out very well for us, we’ve seen very little instance of fraud.”

Covello said that ballots received for deceased individuals should be returned to the sender with the word “deceased” written on the envelope.

According to Kimberly Burnett, spokeswoman for New Jersey’s Middlesex County government, forged signatures on returned ballots “will be flagged by Board of Elections staff when researching signatures.”

She added in an email that “a flagged ballot will be referred to the county prosecutor for election fraud if our office determines a voter is deceased through a post-election audit.”

A Florida Man was charged with voter fraud after requesting a ballot for this deceased wife, claiming he wanted to “test the system to see if it worked.” Supervisor of Elections staff conducted a routine check to process her application and noticed she had died in 2018.

AFP Fact Check has debunked other claims about mail-in voting, including the false story of a Texas man caught after filling 1,700 ballots, or claims that adding a stamp will expedite mail-in ballots in the mail.