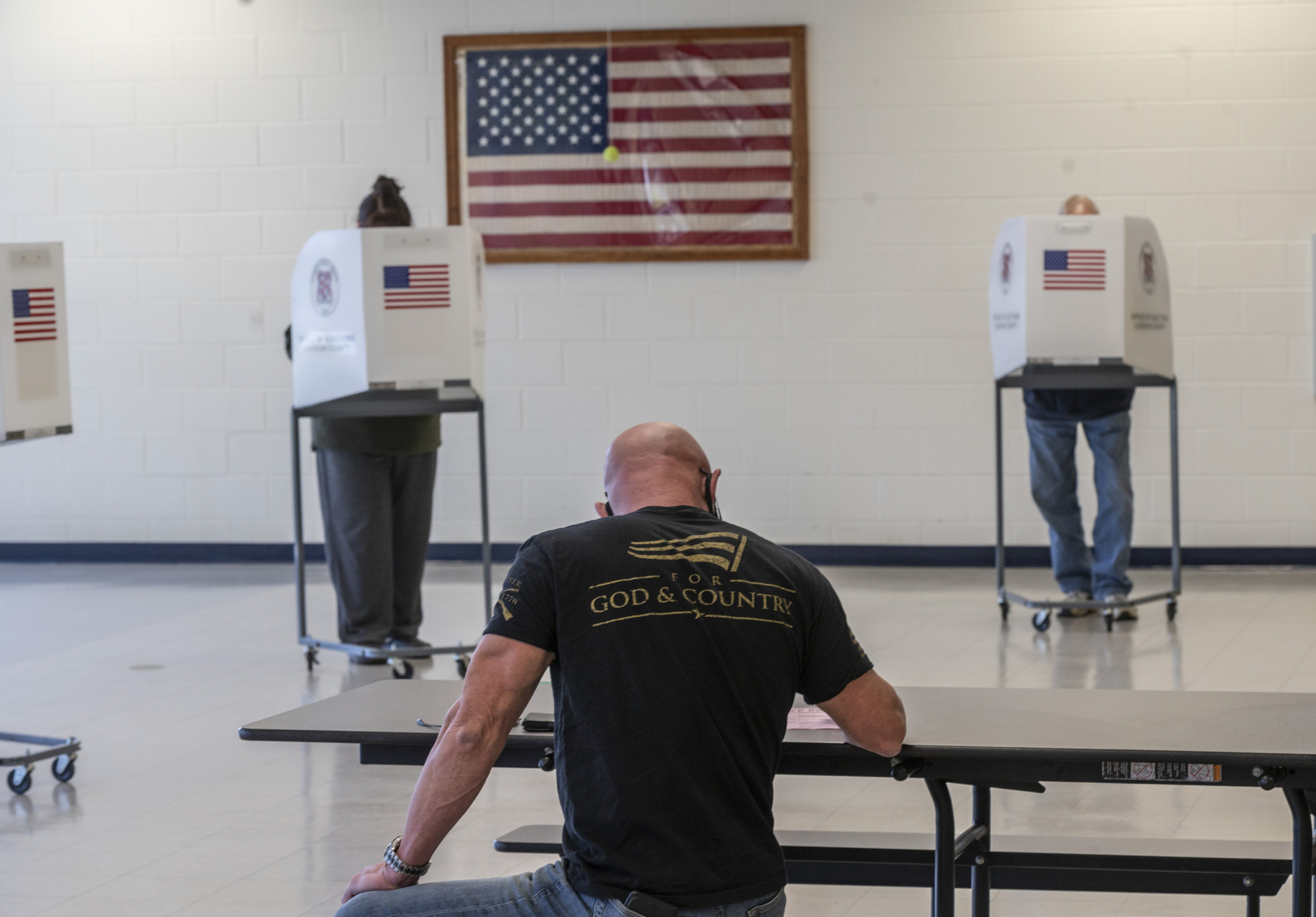 Voters cast their ballots at a polling station in Leesburg, Virginia on November 3, 2020 (AFP / Andrew Caballero-Reynolds)

Phony flyer calls for Antifa riots after US election day

On election day, an image circulating online purportedly called on supporters of the leftist Antifa movement to dress up as Trump voters and riot the day after polls close.  The claim is false; the image previously circulated prior to peaceful, anti-Trump protests in 2017, and the flyer’s message is also inconsistent with Antifa tactics, an expert told AFP.

“Antifa gearing up for false flag violence disguised as Trump-supporters,” claims the headline of a November 3 article shared 8,000 times in a few hours.

The article features the photo of a flyer showing a masked man wielding a Molotov cocktail, with a message telling “Antifa Comrades” to disguise themselves as “Patriots/Trump supporters” on November 4, by donning MAGA hats and American flags so that “police and patriots responding won’t know who their enemies are, and onlookers and the media will think there are Trump supporters rioting.” 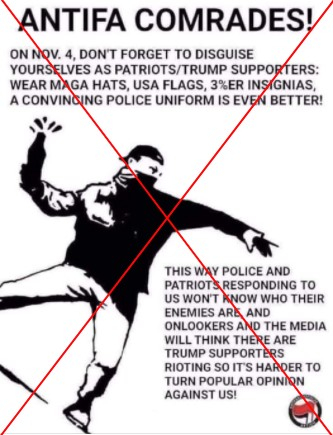 The flyer itself was also shared on Facebook and Instagram in the days leading up to the election.

The claim was already being shared as far back as November 3, 2017. In October of that year, conservative-leaning conspiracy websites warned that Antifa groups were planning on instigating a civil war on November 4, 2017.

Antifa Checker, a Twitter account that advertises real Antifa accounts and debunks false ones, denounced the theories as false on October 1, 2017.

The claims appear related to a call by activists from left-leaning group Refuse Fascism to hold nationwide anti-Trump protests on November 4, 2017, as reported at the time.

On November 4, 2017, protesters gathered in several peaceful demonstrations in US cities such as San Francisco, Philadelphia and New York City.

The poster is likely the work of impersonators, Mark Bray, a historian at Rutgers University in New Jersey specializing in radical left political movements, told AFP by phone.

“Those flyers are not created by Antifa groups,” Bray said.

“I haven’t seen flyers and proposals like that being put forward by any left or anti-fascist group on social media,” the author of Antifa: The Anti-Fascist Handbook added.

“Instead their focus is about vocalizing people to protest in the days after the election and to keep an eye on what far-right groups are doing.”

Antifa, short for anti-fascist, is a political movement that seeks to combat fascist and racist groups, mostly via awareness campaigns and online monitoring of far-right groups, sometimes resorting to physical intimidation.

As members of an unstructured and uncoordinated movement, Antifa adherents hold a variety of left-wing views and do not plan nationwide actions of the sort depicted in the flyer.

Bray predicted that any Antifa actions around the election would mainly target far-right groups.

“They don’t always make that public but if groups like the Proud Boys or whoever organize demonstrations or show up to intimidate people at the polls, it’s possible that anti-fascist groups could show up to oppose them,” he said.

If Antifa adherents chose to engage in impersonation or infiltration of right-wing groups, Bray says, it would be “for the purpose of information gathering and to sow dissent within groups to have them sort of fall apart, not to create a street presence.”

Bray said he suspects that the flyer was created to “try and paint anti-fascists and leftists as some sort of insidious threat.”

A similar poster featuring an image of a rioter falsely purporting to be an advertisement for “professional anarchists” made rounds on social media in the summer of 2020, as the US saw a wave of protests against racism and police brutality.

False depictions of Antifa tactics from their political adversaries were always commonplace, but reached greater visibility after President Donald Trump called for its registration as a terrorist group in May 2020.

Experts including an FBI official pointed out this was not possible as Antifa is an ideology and not a coordinated structured group.