As Americans vote on Election Day, a photo purporting to show a supporter of President Donald Trump blocking access to a polling place is circulating online. This is misleading; police said the man in the picture, taken on November 1, 2020, did not stop people voting, but rather briefly took a photo with a Trump flag.

The accompanying photo shows a man holding a Trump 2020 flag standing outside a building and what appears to be a ballot drop box. The same claim was made in a November 3 Facebook post by pro-Joe Biden page “The Other 98%,” which has more than six million followers. The page subsequently updated the post to correct it.

AFP ran a keyword search for “Clifton City Hall” on Facebook and traced the photo circulating online to a post from November 1, two days before the final voting day of the 2020 election.

“Did anyone see this??? Totally inappropriate,” the caption reads. 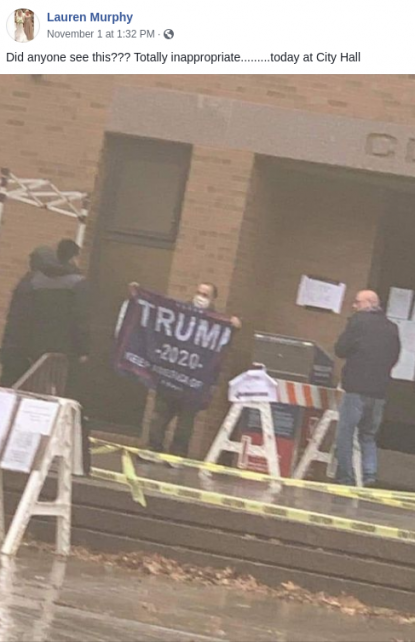 Contacted by AFP, a spokesman for Clifton Police Department said officers were called to city hall in the community north of Newark on November 1, but denied claims that the man in the picture stopped people from voting.

“It looks like the person came, voted, took a picture with the flag and left,” public information officer Robert Bracken said. “There’s no allegation in the police report of any voter intimidation, harassment or blocking of the polls.”

He said the incident happened in “under a minute” and that the man had left by the time police arrived. 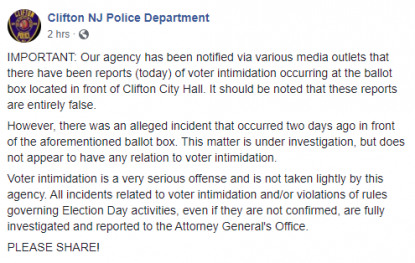 AFP contacted a woman on Facebook who claimed it was her friend who called the police, but had not received a reply by the time of publication.