Misleading social media posts about the anti-migrant violence gripping South Africa have been spreading across the continent, fuelling tensions that have already sparked reprisal attacks in Nigeria. Some posts purporting to show the violence contain old images, or footage from a different country altogether. Here’s a round-up of the various posts we’ve fact-checked.

A deadly fire in India

Tens of thousands of Facebook and Twitter users have watched videos showing people frantically jumping out of a burning building. If the captions are to believed, the footage shows the deadly violence in Johannesburg.

“I am leaving South Africa, please don't call me while away, I will call you,” reads the caption on one such Facebook post, which we’ve archived here. The post, which has been shared more than 900 times, says the video was filmed in the Johanesburg central business district. 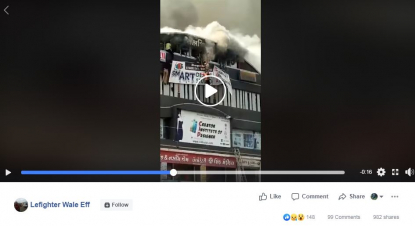 In fact, the video was not filmed in South Africa at all, but in India. It shows a horrific fire in the western Indian city of Surat, which killed 20 teenagers last May. With the help of AFP’s Fact-Check team in India, we compared the video to local news reports at the time to confirm the video shows the fire in Surat -- you can read the full fact-check here.

The attacks on foreign-owned stores in South Africa have prompted fury in the continent’s other superpower, Nigeria.

Nigerians have taken to the internet in droves to express anger over the violence, with Femi Fani-Kayode, a former aviation minister and prominent commentator, whipping up fears about the “mass murder of Nigerians”.

On Monday, Fani-Kayode posted a Facebook video showing what he said was a South African minister “subtly trying to justify the killing of Nigerians”. While the video did show former deputy police minister Bongani Mkongi complaining about immigration, it was filmed back in 2017 and Mkongi is no longer minister. Read our fact-check about the video here.

Nigerian Foreign Minister Geoffrey Onyeama on Wednesday warned that misleading social media posts were fanning the tensions, stressing that no Nigerians have been confirmed among the ten citizens killed.

“There is a lot of stories going around of Nigerians being killed, jumping off buildings and being burnt. This is not the case,” he said.

“What we know in that premises, shops of Nigerians have been looted and property destroyed."

As reported by AFP, South African businesses have been targeted in reprisal attacks in Nigerian cities, and South Africa on Thursday shut its diplomatic missions in Lagos and Abuja as a security measure.

South African telecoms operator MTN has been among those targeted, and the company announced on Wednesday that it was temporarily closing its Nigerian outlets.

Photos have been circulating online supposedly showing one such reprisal attack at an MTN branch in Apapa, Lagos. 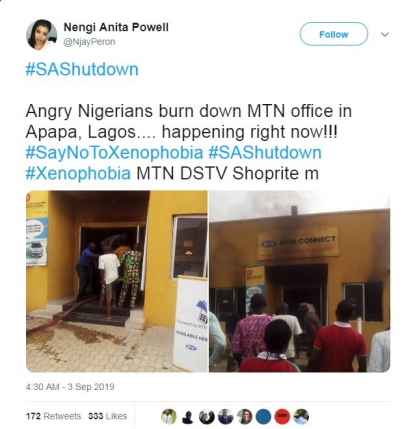 However, as we note in this debunk, these particular photos are several years old and an MTN spokesman said this office had not been attacked.

South Africa has suffered repeated waves of xenophobic unrest in recent years, fuelled by angry accusations that migrants from other African countries take up scarce jobs.

Since the unrest broke out on Sunday, various images showing similar attacks in previous years have begun surfacing again online, in posts claiming that they show the current situation.

They include an AFP photograph taken during a confrontation in Johannesburg in April 2015 -- check out this fact-check for more.

In some cases, people have been sharing images and videos from earlier incidents unrelated to tensions over immigration.

One video has been shared thousands of times via various accounts, alongside claims that it shows a foreign national set alight by South Africans during this week’s unrest. But as explained here, the footage shows an attack last January, when people beat and burned a man in the street for allegedly trying to steal a handbag. 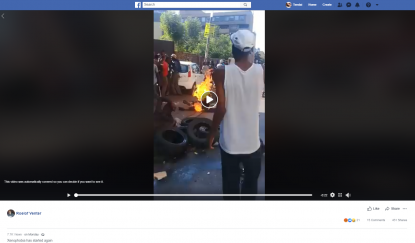 A screenshot taken on September 5, 2019, showing one of the recent Facebook posts carrying the old video

Graphic videos of a man being attacked with stones have also been spreading online, but as detailed in this post, the incident happened a month ago. Local media reports also suggest the videos show a mob attacking two suspected robbers and that the incident was not related to immigration.

Finally, a video of a dramatic shootout has racked up tens of thousands of views on Facebook since the unrest began. 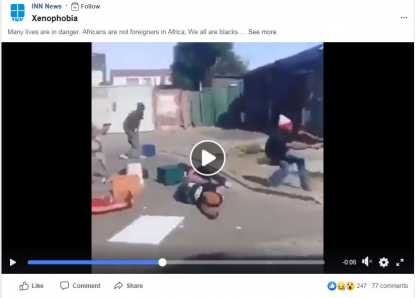 The participants in this 'shootout' are actually actors

In fact, AFP has fact-checked it on two previous occasions. While many social media users have taken for a genuine video of the unrest, a longer version of the footage shows that the participants in the “shootout” are actors.

You can read an earlier fact-check we published about the post, when it was circulating alongside claims that it showed a gang shootout, here.

South Africa unrest: video of a man being pelted with stones is a month old