Skip to main content
Demonstrators confront one another after one group put out a fire during a night of protest on July 31, 2020 in Portland, Oregon (AFP / Alisha Jucevic)

Social media posts claim that a man assaulted during a Black Lives Matter protest in the US city of Portland died from his injuries. This is false; a man was beaten and injured in the Oregon city on August 16, 2020, but police confirmed that he is alive and the man spoke with local media after leaving the hospital.

“The truck driver attacked in Portland has passed,” claimed several posts shared tens of thousands of times since August 17, 2020, referencing an incident captured on video and viewed around one million times on social media. 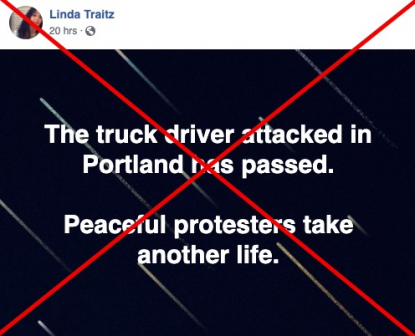 On August 16, crowds of protesters had gathered for the 81st consecutive day of protest against police violence and systemic racism in the city, which saw a controversial deployment of federal officers in July.

That evening, protesters beat a man in the street after he crashed a truck during a confrontation near the demonstration, The Oregonian reported.

One assailant ran up to the man and kicked him in the face, apparently knocking him out, it said.

At 10:27 pm, police officers responded to the incident, “and found an adult male who was unconscious with injuries,” according to a Portland Police Bureau news release.

“The victim was transported to an area hospital with non-life-threatening injuries and is recovering,” the release adds.

A subsequent statement on August 18 said police were aware of social media posts claiming the victim died of his injuries. “These reports are false. The victim has been released from the hospital and is recovering,” the release reads.

The victim, Adam Haner, appeared in an interview with local media KATU2 on August 19 and said that doctors are concerned he could have long term vision damage. Haner said that the August 16 altercation began when he tried to stop people stealing from a person’s backpack.

Police are searching for the suspected assailant, 25-year-old Marquise Love, who was still on the run as of August 20.

In June 2020, AFP Fact Check debunked social media posts that also claimed a man died after being kicked in the head during a protest in Portland. That incident came after George Floyd, a black man, died in Minneapolis police custody in May 2020, triggering nationwide demonstrations and a national reckoning over the country’s history of racism.

Most of the protests around the country were peaceful, and have seen Black Lives Matter gain increasingly broad support. But the movement has been the target of misinformation, which AFP Fact Check has debunked.