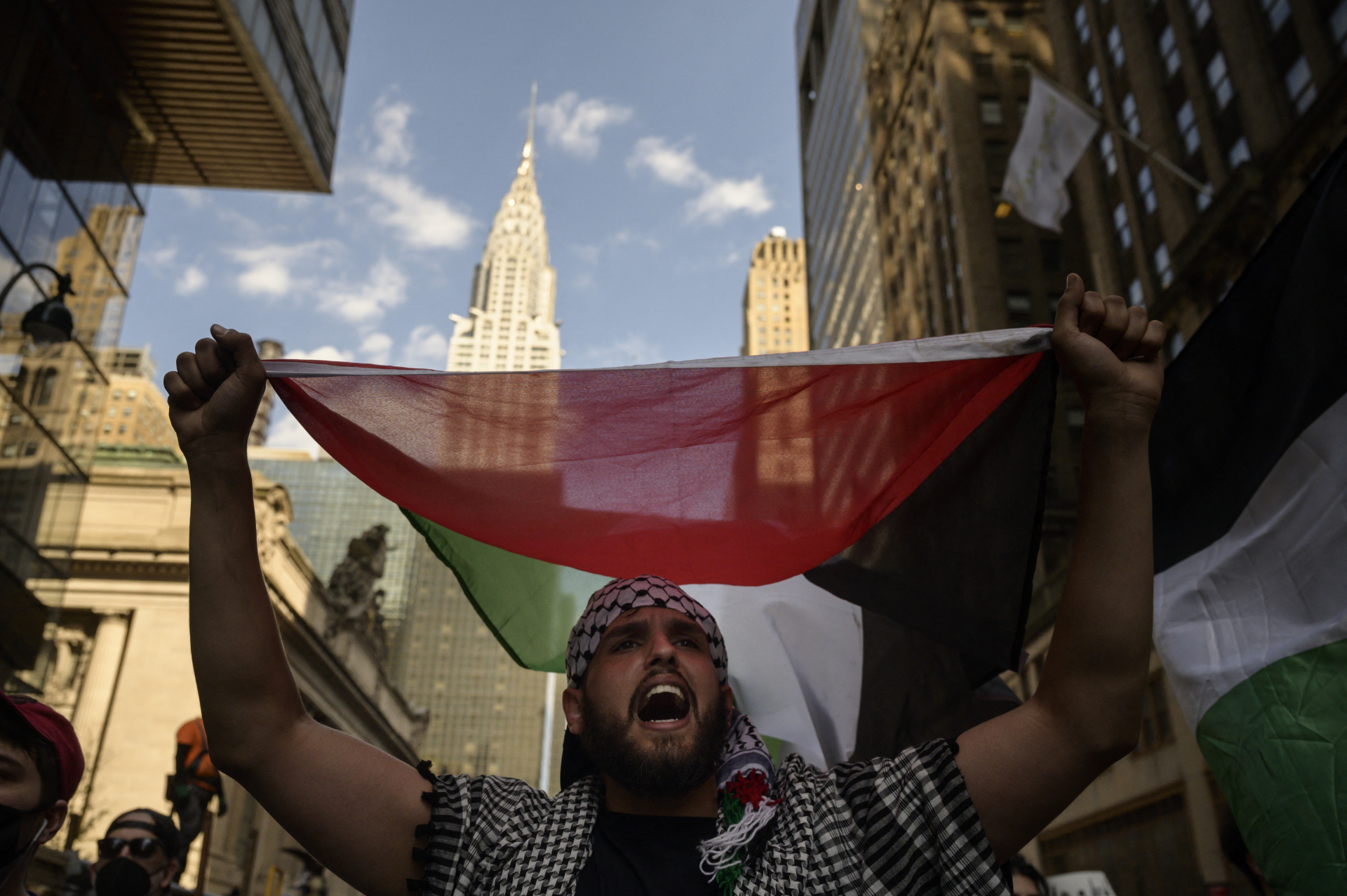 Demonstrators hold flags and placards in support of Palestine in midtown Manhattan, New York City on May 18, 2021 (AFP / Ed Jones)

Black Lives Matter did not voice support for Hamas

Articles and social media posts claimed that Black Lives Matter tweeted support for Hamas, the Islamist rulers of Gaza, who are designated as a terrorist group by the United States. The claim is false; BLM expressed solidarity with Palestinians but made no mention of supporting Hamas, and analysts said conflating the two is a deliberate distortion.

“Black Lives Matter Declares ‘Solidarity’ With Hamas in Israel Conflict,” said the headline of a May 18, 2021 article published by The Daily Wire, a conservative news website that has previously been fact-checked by AFP. With its declaration, Black Lives Matter (BLM) was “effectively backing the Hamas terror organization in its ongoing conflict with Israel,” The Daily Wire wrote.

The website issued a correction following the publication of AFP’s fact check.

A screenshot taken on May 24, 2021 shows a correction to an article on The Daily Wire website

An article published by Fox News made a similar claim about BLM and Hamas, but was later revised to say “Palestinians” instead.

Despite the update, the Fox article was tweeted by Jenna Ellis, a former senior legal advisor to Donald Trump, who claimed that “BLM, Inc is literally endorsing terrorism.”

Fighting between Israel and Palestinian armed groups, the most powerful of which is Hamas, began on May 10 when rockets were fired from the coastal Gaza strip into the Jewish state, prompting retaliatory air strikes from Israel’s military.

The exchanges follow weeks of tension in Jerusalem, particularly over planned expulsions of Palestinians from their homes in east Jerusalem to make way for Jewish settlers, and Israeli police moving in on worshippers at the Al-Aqsa mosque compound, one of Islam’s holiest sites.

The death toll stands at 243 in Gaza, according to the local health ministry, and 12 in Israel, medics there said. A truce brokered by Egypt appeared to be holding after it took effect on May 21.

The clashes sparked pro-Palestinian protests around the world, including in the United States, and BLM tweeted a statement in response to the Gaza conflict, expressing “solidarity with Palestinians.” 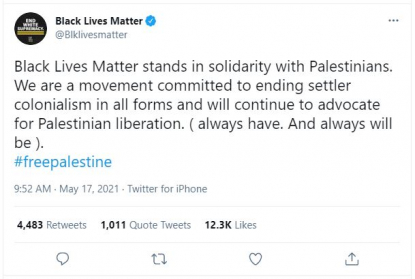 The BLM movement gained increasingly broad support after the death of George Floyd, a Black man, in Minneapolis police custody in May 2020, which sparked nationwide demonstrations against police brutality and racism.

An Instagram account from BLM in Paterson, New Jersey, issued a similar statement of solidarity, saying: “Our struggles are connected in many ways.”

But the BLM declarations were only general claims of support for Palestinians. They made no mention of Hamas, which the US, European Union, Israel and the Organization of American States consider a terrorist organization.

AFP made repeated attempts to reach BLM for comment but had not received a response by the time of publication.

Khaled Elgindy, a senior fellow and director of the Program on Palestine and Israeli-Palestinian Affairs at the Middle East Institute in Washington, DC, said the claims “conflate all Palestinians with Hamas” and are “totally inaccurate and misleading… deliberately so.”

“It seems to me a very obvious and transparent attempt to tarnish all Palestinians as terrorists,” and anyone who supports them also as backers of terrorism, said Elgindy, a former advisor to the Palestinian leadership on negotiations with Israel.

Nathan Brown, a Middle Eastern law and politics scholar at The George Washington University said of the claim: “It is not just misleading; it is simply false. Hamas represents a portion of the Palestinian population, but its support in recent polls has placed it in a position less popular than the British Labour Party today.

“The large majority of those -- Palestinians and not Palestinian -- who have expressed support for Palestinians in the conflict are not supporters of Hamas.”

AFP Fact Check has debunked other claims about the BLM movement here, as well as numerous false or misleading claims in English about the latest Gaza conflict.