This photo was taken in Chile in 2016

As Israel-Palestinian tensions escalated into deadly violence, a photo surfaced in Facebook, Twitter and Instagram posts that claimed it showed an Israeli soldier kneeling on a Palestinian child’s neck. The claim is false: the photo shows a police officer in Valparaíso, Chile in 2016. AFP has previously fact checked the same picture, which circulated during protests following the death of George Floyd.

The image was posted here on May 15, 2021 by Rana Mashood Ahmad Khan, a member of the Pakistan Muslim League-Nawaz (PML-N) political party and the Punjab provincial assembly.

“Aside from statements urging peace and condemning this action, it is now necessary to conduct Jihad against this oppression by Israel. All Muslim countries will now have to stop this oppression,” the post’s Urdu-language caption reads.

Text above the image reads: “An Israeli soldier kills a Palestinian child and the world has not moved for him. Share the picture until it rotates in the world to show the Zionist brutality in Palestine”.

Screenshot of the post falsely claiming to show an Israeli soldier taken on May 22, 2021.

The image surfaced online as deadly violence erupted between Israel and Palestinian militants in the Gaza Strip. A ceasefire came into effect on May 21, 2021 after 11 days of fighting in which Israeli airstrikes killed more than 200 people in Gaza, including 66 children. Twelve people were killed in Israel.

AFP ran a reverse image search and found the photo in an article by Chilean radio station, Radio ADN from October 1, 2016. It claimd the image was shared by photography collective Frente Fotográfico.

“Frente Fotográfico took to Facebook to denounce a case of police brutality committed against a young man doing graffiti in Valparaíso,” it said.

The insignia on the man’s jacket resembles that of Chile's national police force, the Carabineros de Chile. 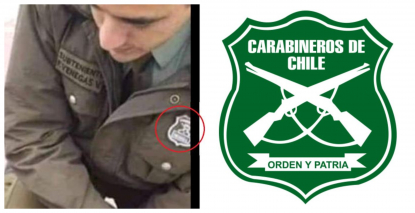 Screenshot comparing the insignia on the officer’s jacket (L) with that of the Carabineros De Chile (R). Taken on May 22, 2021.

AFP found the same photo shared on Frente Fotográfico's Facebook page alongside a video of the young man in the picture speaking to reporters.

A Google search for “Carabineros joven (young) Valparaíso” revealed a longer version of the video posted to Facebook on October 1, 2016. In the footage, women speaking in a Chilean accent can be heard pleading with the officer, as the young man on the ground says he cannot breathe.

Chilean TV channel 24 Horas reported on the incident on October 3, 2016.

AFP previously debunked the same photo in June 2020 in posts that tied it to protests in the US following the death of George Floyd, when an officer kneeled on his neck for more than nine minutes.