Skip to main content
A labourer checks his mobile phone as he takes a rest next to crates at a wholesale vegetable market in Hyderabad. (AFP / Noah Seelam)

A photo of corpses floating in a river has been shared repeatedly in Facebook posts that claim it shows Covid-19 fatalities in the east Indian state of Bihar. The claim is false: the image has actually circulated online since 2015 in media reports about bodies found in a river near a cremation site in India.

The post’s Hindi-language caption translates to English as: “500 Covid bodies found floating in Bihar’s Buxar and Birpur. A lot of them are in plastic bags. The area of about 30 kilometres shares a border with both Uttar Pradesh and Bihar. The chief minister Nitish Kumar should resign.” 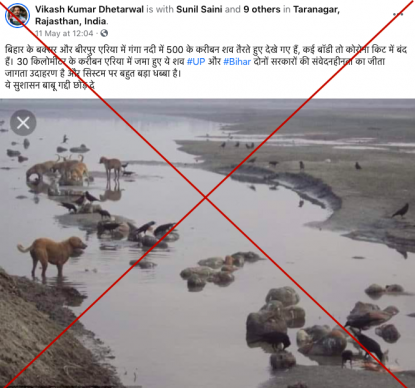 Buxar is situated in the east Indian state of Bihar. As of May 2021, its chief minister was Nitish Kumar.

Birpur is in the neighbouring state of Uttar Pradesh.

The posts circulated online as authorities in northern India said they had installed a net across the Ganga river after the bodies of dozens of suspected Covid-19 victims washed up in Bihar and Uttar Pradesh in May 2021. AFP reported on the incident here.

India said on May 24 it had passed more than 300,000 coronavirus deaths, the third country after the United States and Brazil to hit the figure as it battles a huge wave of infections, AFP reported here.

The photo was also shared alongside a similar claim here and here on Facebook.

A similar photo was published here by Getty Images in 2015. It was credited to India's English-language newspaper the Hindustan Times.

The photo is captioned: “100 Bodies Recovered From Ganga River In Uttar Pradesh.”

Below is a screenshot comparison of the photo in the misleading posts (L) and the original photo (R):

The photo was taken by a photographer with the Hindustan Times in January 2015. The newspaper published a report about the incident on January 14, 2015.

Similar reports were also published by multiple other media including NDTV and Times of India in January 2015.