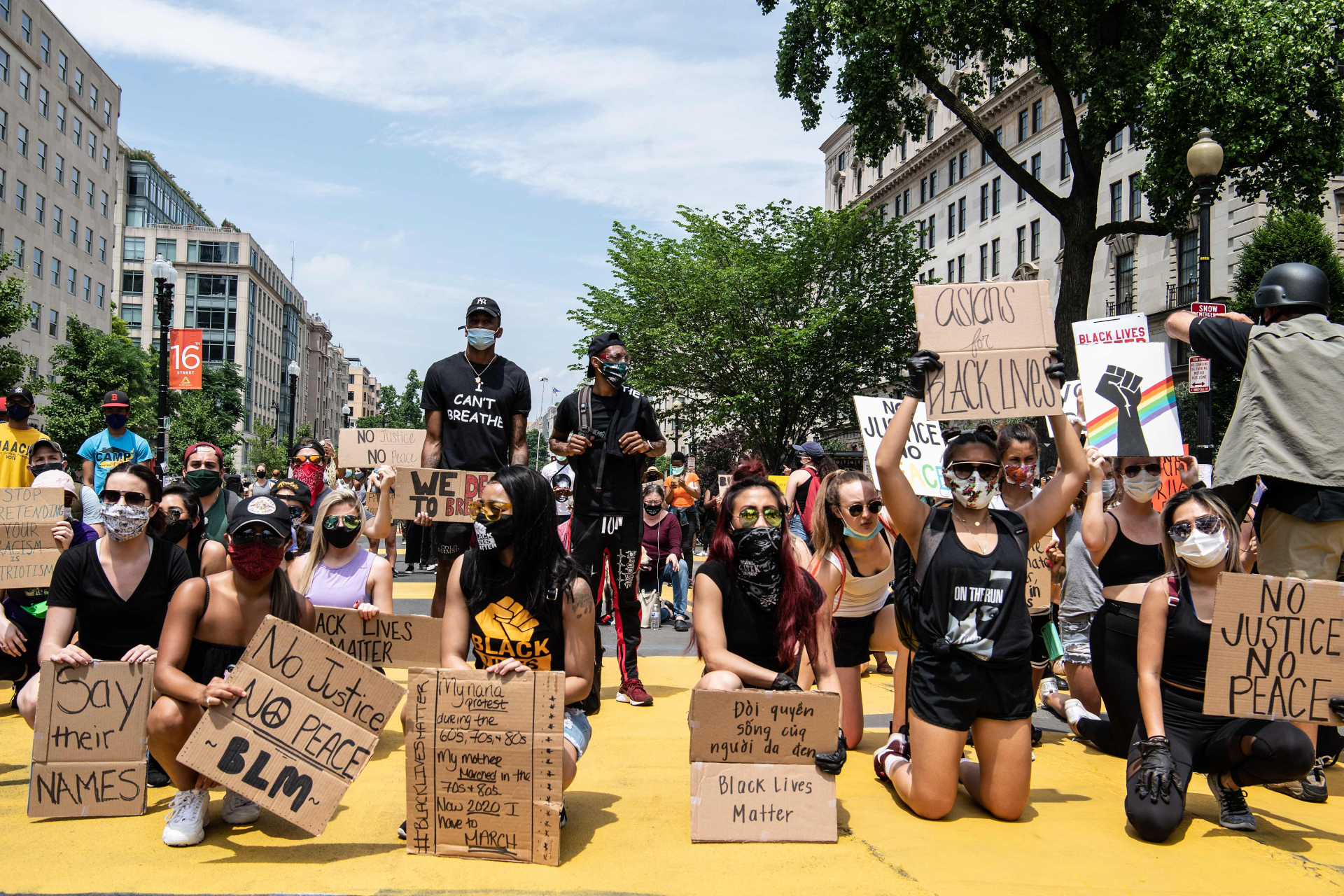 Protesters take part in a demonstration against racism and police brutality on June 6, 2020 in Washington (Nicholas Kamm / AFP)

Black Lives Matter did not issue ‘rules’ for white protesters

An article shared on Facebook claims Black Lives Matter issued rules for white people who join protests sparked by the police killing of George Floyd. This is false; Black Lives Matter says it did not issue any such directives, and the supposed rules first appeared in posts that made no mention of the organization.

Black Lives Matter (BLM) has gained increasingly broad support since the death of Floyd in Minneapolis police custody on May 25, 2020, which sparked weeks of mostly peaceful rallies across the United States and worldwide. But the group has also been the target of misinformation, including social media posts that seek to undermine its aims and values.

“BLM pasted these ‘rules’ for ‘white folks’ attending protests on social media,” says the June 8, 2020 article on uniteamericafirst.com, which was founded by a man named Will Johnson.

He says he was “blessed” to have been invited by President Donald Trump to the White House, and has posted that “you can’t be a Christian and believe in BLM.” 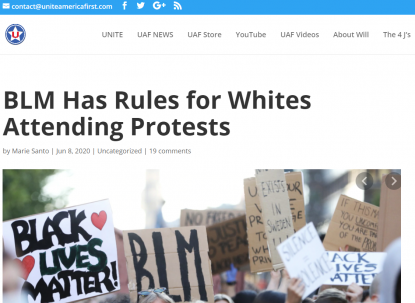 A screenshot of the article shared on Facebook, taken on June 16, 2020

The article includes an image of the alleged rules, which appears to be a screenshot of this tweet from an account that promotes pro-Trump views and has disparaged BLM. 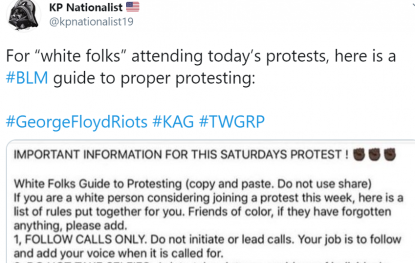 Among the instructions: “If a black person tells you to do something, you do it immediately without question.”

Another tells whites to “stay in the back” until they hear a call such as, “white people to the front.”

The “rules,” which have been called “racist,” also tell whites: “Your job is to follow and add your voice when it is called for.”

But Black Lives Matter did not issue the purported guidance.

"BLM Global Network did not release any 'rules for white protesters' language, nor was it posted or shared on any of our social accounts,” Kailee Scales, managing director of the Black Lives Matter Global Network covering the US, Canada and UK, told AFP by email.

Like the marches themselves, the misinformation about how to protest has spread across the globe.

Some social media posts, including this one from an Australian anti-immigration party politician, linked the rules to “Black Lives Matter Melbourne” in Australia. A British-based conspiracy theorist, Paul Joseph Watson, also claimed the rules originated there.

However, a protest on June 6, 2020 in Melbourne in support of Black Lives Matter was organized by Warriors of the Aboriginal Resistance, whose Facebook page made no mention of any such rules ahead of that rally.

Some US Facebook users apparently sympathetic to Black Lives Matter shared the “rules,” including here in a North Carolina group, and here ahead of a June 12 “Youth for BLM March and Speak Out” in Amherst, Massachusetts.

She earlier told AFP that “the disinformation about us starts at the fringe but is amplified by right-wing propaganda networks and brought into the mainstream by sharing on social platforms.”

At the start of June, other US posts, as well as some in Canada, listed the same “rules” but with no mention of Black Lives Matter, and no indication of where they originated.

“Tomorrow there will be a PEACEFUL protest held in Vancouver. If you are planning on attending please take a look over the below!” one of them said.

A search on social media monitoring tool CrowdTangle found the earliest mention of the rules on June 2 in a Facebook post by an Arkansas resident who has posted in support of the movement.

As with many others posting the supposed guidelines, they had been copied and pasted, making their origin more difficult to determine.

AFP Fact Check has debunked more than 30 examples of false or misleading information about Floyd and the protests that followed his death.