Skip to main content
Former US secretary of state Hillary Clinton speaks at a press conference on February 25, 2020 in Berlin (David Gannon / AFP)

Hillary Clinton was not ‘on trial’ in early June

Social media posts shared more than 200,000 times claim Hillary Clinton was “on trial” in the first week of June 2020 over the Benghazi attack that occurred during her tenure as secretary of state. This is false; Clinton’s spokesman, her lawyer and court records say the case heard that week was about a public records request, and that she is not on trial.

“Did anyone realize Hillary Clinton is on trial for Bengazi this week or does the media have you blinded by riots?!?!?!” reads a June 3, 2020 Facebook post, referring to protests that spread nationwide after the death of George Floyd at the hands of a police officer, some of which devolved into looting and vandalism. 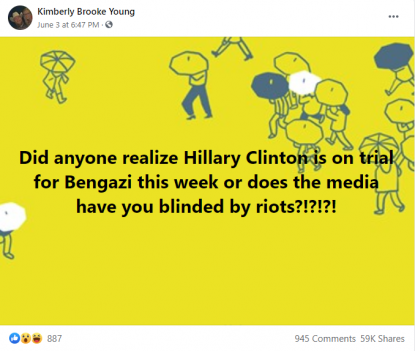 “She is not on trial,” Clinton’s spokesman, Nick Merrill, told AFP in an email.

In September 2014, Judicial Watch, a conservative foundation, sued the State Department to compel compliance with a Freedom of Information Act request seeking “any and all records concerning, regarding, or related to notes, updates, or reports created in response to the September 11, 2012 attack on the U.S. Consulate in Benghazi, Libya.”

The information sought has expanded since the lawsuit was filed, and on March 2, 2020, US District Judge Royce Lamberth granted Judicial Watch’s request to depose Clinton “on matters concerning her reasons for using a private server and her understanding of State’s records management obligations.”

The arguments heard Tuesday, June 2 at the US Court of Appeals for the DC Circuit were a petition to remove that order, according to Clinton’s attorney, David Kendall, and Merrill.

Kendall said in an email: “She was not even a party to the... case until last fall, when she intervened to be heard on the issue (of) whether her deposition should be taken. It’s just a Freedom of Information Act case.”

The only issue at hand is whether Judicial Watch received all the documents it is entitled to from the US Department of State -- not Clinton herself -- Kendall said.

The full audio recording of the June 2 arguments is available here.

The US Court of Appeals for the DC Circuit in August granted Clinton’s petition to prevent the deposition.

This is false; Kendall told AFP in an email that he had “no idea what this claim is referring to.”

“There were no legal proceedings of any kind involving former Secretary Clinton on September 9, 2020.”

The US House of Representatives Benghazi Select Committee and Department of State inspector general’s office completed publicly available investigations into the State Department’s handling of the attack.