This image shows an abandoned US mall, not South Africa’s Carlton Centre

An image shared thousands of times on Facebook purports to show the deterioration of an iconic building in South Africa. The posts are false; it actually shows an abandoned mall in the United States.

“Carlton centre where the ice rink used to be,” reads the caption, referring to South Africa's famous Carlton Centre. 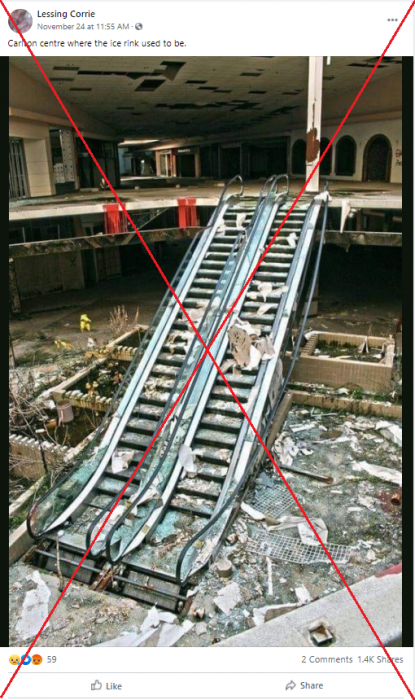 However, a reverse image search of the picture turns up multiple links referring to a mall in Ohio, in the United States.

World Abandoned, a website dedicated to places across the world that have been abandoned, shares a story about Ohio’s Rolling Acres Mall, a shopping mall that closed down in 2008.

AFP Fact Check found several pictures of the mall posted in 2015 on a blog by photographer Johnny Joo and compared them to the misleading Facebook posts. Similarities can be seen in both pictures, such as the frayed red flags hanging on the left of the escalators, as well as a pillar above the stairs with a distinct pattern of flaking paint.

South Africa’s Carlton Centre is one of the tallest buildings in Africa, erected in 1973. It consists of a shopping mall that is still very much operational as seen on November 27, 2020, in a video on the centre's Facebook page showing Black Friday shopping.

On the same day, the page shared an audio fact-check by Radio Islam International addressing the misleading social media posts.

The ice rink mentioned in the misleading post was remodeled in 2016 and replaced with Skyrink Studios, a media production facility.