Footage of a man delivering an atheist invocation to various gods has been shared thousands of times on Facebook claiming to show the new American government praying to Satan. This is misleading; AFP Fact Check traced the video to 2014, long before US president-elect Joe Biden won the 2020 presidential race.

The video, which was first posted on Facebook in Nigeria by former Nigerian minister of aviation Femi Fani-Kayode, has since been shared nearly 3,000 times, here, here and here. 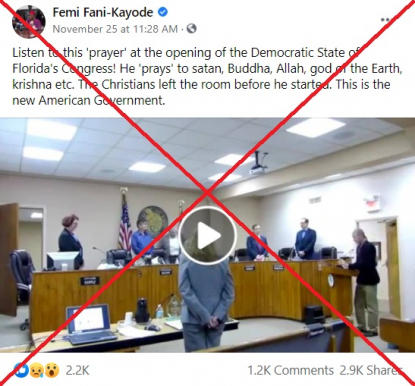 The clip shows a man reciting a text that invokes various gods and deities. Satan is mentioned among them. Before the man speaks, a number of individuals in the room leave quietly, passing by an American flag as they exit.

“Listen to this ‘prayer’ at the opening of the Democratic State of Florida's Congress!” reads the caption on Fani-Kayode’s post. “He ‘prays’ to satan, Buddha, Allah, god of the Earth, krishna etc. The Christians left the room before he started. This is the new American Government (sic).”

Background on US election

Fani-Kayode, a Christian politician from southern Nigeria who aligns with evangelicals in the United States, openly supported President Donald Trump and shared misinformation about incoming leader Joe Biden and the electoral process – as Trump himself did.

He believes Trump was God’s candidate and has compared him to Jesus in some of his tweets, insisting he will still be sworn in by January 20, 2021, despite Biden winning the election on November 3, 2020.

Fani-Kayode’s claim that the video he posted “is the new American government” is false, as is his description of the location as the “democratic state of Florida’s congress”.

The video, however, is authentic.

Using video verification tool InVid and reverse image searches, AFP Fact Check traced the video to multiple sources including here, here and here. They all confirm that the video has been circulating online since December 2014.

According to a report by Florida newspaper The Palm Beach Post, the video was recorded before a City of Lake Worth commission meeting in Florida’s Palm Beach County on December 2, 2014 and shows a man identified by American news websites The Sun-Sentinel and CBN News as atheist Preston Smith, who delivered an invocation to various gods like Allah, Thor, Krishna, Zeus and Buddha. Satan was mentioned among them.

As seen in the video, some of the commissioners present at the meeting left the room before Smith began to speak, to which he responded: “Duly noted.”

According to the official Lake Worth Beach website, the city’s administration follows a “commission-manager form of government” and residents are served “by five non-partisan elected officials”.