Skip to main content
A health care worker gets a vial of the Pfizer-BioNTech's Covid-19 vaccine on August 24, 2021, at a vaccination centre in Holon, Israel. ( AFP / Ahmad Gharabli)

Footage of an Israeli doctor speaking about Covid-19 vaccines has been viewed more than one million times in social media posts that claim he criticises the jabs. The posts are misleading; the doctor was in fact encouraging vaccination in the full interview, which has been edited to make it appear he says the shot is ineffective.

The video was posted on Twitter here on August 6, 2021, and has been viewed more than 1.3 million times.

The tweet purports to show quotes from the interview that appear to cast doubt on the efficacy of Covid-19 vaccines:
"'95% of the severe patients are vaccinated',
"'85-90% of the hospitalisations are in Fully vaccinated people.' "'We are opening more and more COVID wards.'
"'The effectiveness of the vaccine is waning/fading out'." 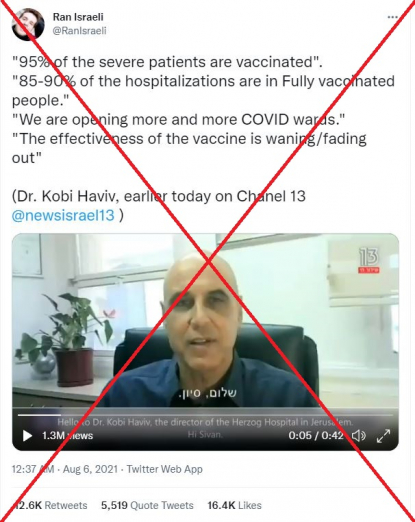 The posts misquote the doctor, take his comments out of context and omit key context from the full interview, in which he encourages Covid-19 vaccination.

A keyword search confirmed that the man in the video is Dr Jacob "Kobi" Haviv, director at Herzog Hospital in Jerusalem.

The footage shared on social media was taken from this interview broadcast on August 5, 2021, by Israel's Channel 13. Haviv's interview starts from the 5:09 mark of the programme.

Below is a screenshot comparison of the video in misleading posts (left) and the original video from Channel 13 (right).

In the full interview, he speaks in favour of Covid-19 vaccinations and blames a spike in cases at his hospital on the fact that protection provided by the vaccine is waning over time.

This call for people to receive a booster shot was not included in the clip shared on social media.

The posts claim that Haviv says, "95% of the severe patients are vaccinated." However, he does not utter these words in either the full or edited video.

Health experts have pointed out that in places with high vaccination rates, it is expected that a high proportion of people admitted to hospital with Covid-19 have received the jab, as there is still a risk of breakthrough infections.

Furthermore, the posts make it appear Haviv is describing the Covid-19 vaccine situation generally, when in fact he is referring to his own hospital.

The posts claim he said that "85-90% of the hospitalisations are in fully vaccinated people" but omit the Hebrew word "etslenu", which translates "at our place".

In a similar way, the posts misquote Haviv as saying, "We are opening more and more COVID wards," although he does not utter these words.

In the full version of the video, Haviv explains that a second unit opened for Covid-19 patients at his hospital was already full. He does not say that "more and more" Covid wards are opening, either at his hospital or elsewhere.

The final quote attributed to Haviv about the efficacy of Covid-19 vaccines "fading" is missing context.

The posts claim he said, "The effectiveness of the vaccine is waning/fading out".

In the full interview, he said in Hebrew, "Unfortunately, as we hear, the efficiency of the vaccines fades. That's why I hope people will hear the call for the third vaccine and that the third vaccine will help."

Israel launched a campaign to offer a third Covid-19 vaccine shot to the elderly on July 30, 2021.

In a video message on August 18, 2021, Haviv said the number of Covid-19 patients admitted to his hospital was falling and attributed that to the booster shot campaign.

"During the weekend, we started to see a decrease and we were really hoping it was related to the elderly getting the third dose of vaccine. Today there is not any doubt, the third dose works," he said in Hebrew.

Haviv has advocated for Covid-19 vaccinations and a photo of him receiving his own vaccination was posted here on his hospital's Facebook page.

'Unvaccinated most at risk'

The majority of patients with serious Covid-19 in Israel are unvaccinated.

According to the Israeli Health Ministry data cited by Haaretz newspaper on October 1, 2021, 73 percent of seriously ill Covid-19 patients were unvaccinated.

Israel's vaccination rollout that began in December 2020 was among the fastest in the world and brought infections to a trickle by June 2021, when all pandemic restrictions were lifted.

But a surge in cases through the summer had experts scratching their heads over whether it was caused by the Delta variant or the waning effectiveness of the Pfizer-BioNTech vaccine — Israel's only Covid jab — five months after the second shot.

The Israeli Health Ministry said in July 2021 that it had seen a "marked decline in the efficacy of the vaccine" in preventing infection and symptomatic illness.

"This decline has been observed simultaneously with the spread of the Delta variant in Israel," it said.

"Nevertheless, the vaccine maintains an efficacy rate of about 93 percent in preventing serious illness and hospitalization cases."