Skip to main content
There is no evidence that Barack Obama (L) and Joe Biden (R) called for the release of Ugandan opposition MP Bobi Wine on Twitter (Photo: Jim WATSON/ AFP)

A Facebook post shared more than a hundred times claims to show tweets from US president-elect Joe Biden and former president Barack Obama calling for the release of Ugandan opposition politician Bobi Wine who was detained on November 18, 2020. However, the tweets are fake; AFP Fact Check found that neither leader has commented on Uganda's political situation on their official Twitter accounts. Wine was freed on bail on November 20, 2020.

On November 19, 2020, this Facebook post shared screenshots of two tweets purportedly published by Biden and Obama on their official Twitter accounts, along with the hashtag #FreeBobiWine. 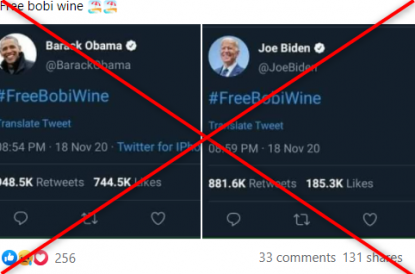 The tweets appear to have achieved major reach, with more than 2.5 million likes and retweets in total.

The Facebook post went up a day after Wine, who is seeking to unseat Ugandan President Yoweri Museveni in next year's scheduled election, was arrested allegedly for violating coronavirus regulations at his rallies. Deadly violent protests followed his detention, as reported by AFP. Wine was released on bail on November 20, 2020.

No evidence of tweets by US leaders

While the US Mission in Uganda condemned the violence, Biden and Obama have made no public statement about the political troubles that have flared in the East African country.

A scan of their Twitter accounts reveals that on November 18, 2020, Biden sent out two tweets; one thanking healthcare workers engaged in the fight against Covid-19 and another talking about a US national security meeting he and Vice-President-elect Kamala Harris had with US national security experts.

While not conclusive since settings can be changed, the fake tweets have been reproduced in dark mode -- unlike the real accounts which use conventional black text on white background.

Political tension in Uganda has been rising as the country gears up for a presidential election scheduled for January 2021. AFP Fact Check has already debunked false claims linked to the unrest here and here.