This image of an injured journalist was taken during a protest five years ago, not at a recent rally

Posts claiming to show a Ugandan journalist brutally beaten by police officers during a recent political rally by pop star-turned-politician Bobi Wine have been shared multiple times on Facebook. The claim is misleading; the picture of injured journalist Isaac Kugonza was taken five years ago during a protest. Kugonza told AFP Fact Check that he was scarred for life.

“Journalist beaten by Uganda police today for covering bobi wine 's route to his office. MUSEVENI IS EVIL,” reads a Facebook post circulating in Uganda along with two images – one of an injured man on the ground and the other of a camera covered in blood. 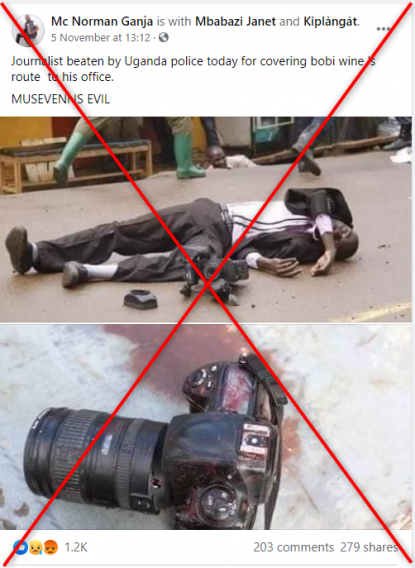 Another Facebook post carried a similar claim on this page, which is managed in Uganda, the United Kingdom and the United States, according to the social network’s transparency information.

Similar claims (including one alleging the wounded man was shot) were shared on Twitter here and here.

“I saw the photograph on social media when I was lying on the ground but that incident happened in 2015, not now,” Kugonza told AFP Fact Check.

He insisted that an injury to his head was caused by a bullet, although police were quoted in this news report from the time saying that Kugonza was hit with a stone during scuffle.

“I was shot in the head and I have a permanent injury. I don't know whether it was targeted at me or it was random and by accident,” Kugonza said in a phone call. “I got healed but the scar has remained and it continues to be a reminder of the shooting.”

This video (at 1'06" minutes) captures the moment when Kugonza, who was by then working for Delta TV, fell to the ground.

In this 2016 report by Ugandan multimedia publisher New Vision, another picture from the incident, credited to Rhamadan Abbey, shows Kugonza on the ground, clearly in pain. 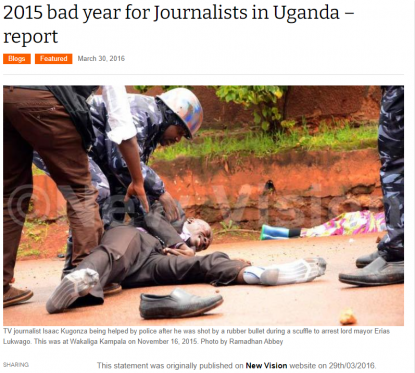 Screenshot of Kugonza's story as published by New Visionm taken on November 16, 2020

Kugonza, who now works for local television station NTV Uganda, added: “I stopped going to the field and am now on the desk as editor at NTV/Spark Tv.”

On November 3, 2020, presidential candidate Bobi Wine said he was detained, “beaten” and “tortured” by police minutes after he registered his candidacy to challenge President Yoweri Museveni in next year’s election.

In televised footage, 38-year-old Wine was seen being pulled by police from his car and thrown into a van after submitting his nomination papers to election officials in the capital Kampala. Wine’s supporters were then violently dispersed.

Following the incident, an online campaign under the hashtag #EndPoliceBrutalityInUganda was started, with online users sharing pictures and videos showing incidents of state-sponsored brutality. Some of the visuals were from recent incidents while others were old and unrelated to current events.

An AFP correspondent in Uganda told AFP Fact Check that while religious and political leaders in the country have condemned how police handled the opposition presidential candidate, the anti-police brutality campaign has not received “much public participation”.

According to a report by the Human Rights Watch, Uganda has a history of police brutality against protesters, which at times has led to fatalities.

Political tensions in the east African country are high as the nation prepares for the election on January 14, 2021. Wine will be challenging Museveni, who has been in power for 33 years.